Rocket science. SOLIDWORKS and SolidLine on a mission to the Moon.

PTScientists are building a lunar lander to visit Apollo 17’s landing site in the second half of 2019. The Berlin-based company is pursuing a bold plan, drawing support from, among others, the Bechtle CAD specialists at SolidLine.

The idea for PTScientists is born in 2008, when founder Robert Böhme and a band of engineers and enthusiasts decide to take part in the Google Lunar XPRIZE. The aim of the competition: to land a probe on the Moon and send a rover at least 500 metres across its surface. A year on, the team officially registers for the Lunar XPRIZE and unveils a first prototype rover shortly after. The company continues on its rocket-fuelled trajectory, building a collaborative relationship with the German Aerospace Center in February 2011 to develop Asimov R3c. The third-generation rover masters a series of tough tests, and goes on to win a $750,000 Milestone Prize for its mobility and imaging subsystems.

A strategic partnership with Audi concluded a year later injects money and also extensive automotive engineering, lightweighting and metal 3D printing experience into the project. The rover’s revised design sees its weight slashed from 45 to 35 kilograms. An advantage not to be taken lightly, given that every kilo costs $500,000 to transport into orbit. “Our aim is to send a payload to the Moon at a fraction of the price it used to cost,” says Jürgen Brandner, CTO and Head of Construction at PTScientists.

SolidLine and SOLIDWORKS are essential.

To this end, PTScientists is building an Autonomous Landing and Navigation module, Alina for short, which is to haul up to 100 kilograms of equipment from Earth to the Moon. Jürgen Brandner has previous experience with SOLIDWORKS as a medical engineer. “I’ve been working with SOLIDWORKS since 1999 and I’m really impressed with how easy it is,” says Mr Brandner. “A fitter can learn to build a frame using standard profiles in SOLIDWORKS in just 40 minutes, which is something I’ve never seen in any other system. It’s exceptional value for money. SOLIDWORKS and SolidLine support us in our construction work so perfectly that it never occurred to us to look for an alternative.” 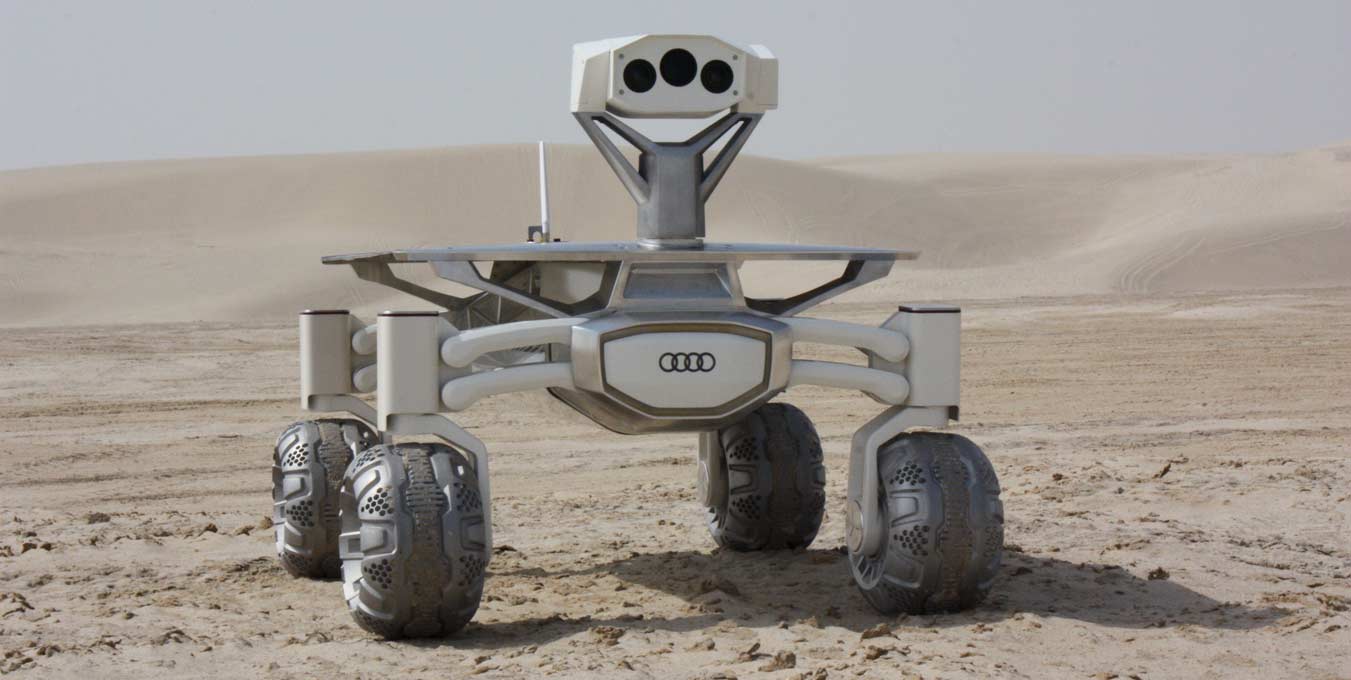 PTScientists have equipped three workstations with SOLIDWORKS, including a premium licence for simulations. Jürgen Brandner has commissioned an assessment of SOLIDWORKS’ capabilities in relation to the specific mission requirements. “Up to now, astronautics has relied on purpose-built simulation systems. Using SOLIDWORKS in this context would be an industry first.” The company is therefore investigating if the software can deal with the physical conditions its designs will have to withstand in space and on the surface of the Moon.

In addition to Audi, PTScientists now also has co-operations with Vodafone, Omega and Red Bull, its official media partner. For many things, however, the company falls back on SOLIDWORKS. For instance, Mr Brandner and his colleagues use SOLIDWORKS PDM Professional to manage the data they accumulate. “This turned out to be the right choice early on, so much so, in fact, that we now manage all of our documentation in SOLIDWORKS PDM. SOLIDWORKS PDM makes it easy to track revisions and identify the most recent version of a document. I also like the way that this tool can be used in many other areas than just development. For purchasers, SOLIDWORKS PDM simply looks like a regular volume holding the PDF files they need to evaluate quotes.”

“SolidLine has implemented the system and given me and my colleagues in IT some quick and easy training in how to use and manage SOLIDWORKS PDM. Working with them has been a seamless and efficient experience right from the beginning,” recalls Jürgen Brandner. PTScientists intends to expand further between now and the launch date. Jürgen Brandner: “We’re currently building a construction space with four workstations, and I’m sure SolidLine will have many useful tips to share again. SOLIDWORKS delivers and integrates a range of solutions that is incredibly easy to use, enabling us at PTScientists to turn into reality some plans that are, quite literally, flying high.

In March 2018, HoloLens made its official début in an operating theatre using a new procedure developed by apoQlar together with surgeons from Hamburg’s Marienkrankenhaus. The underlying software runs on Microsoft’s HoloLens delivered by Bechtle.

With its flagship publications, Handelsblatt and Wirtschaftswoche, Germany’s leading publishing house reaches two million readers every day. When the Handelsblatt Media Group sought to empower its employees with the workplace of the future, it reached out to Bechtle.

FIVE CLOUDS FOR THE FUTURE.

Bechtle and INSYS share a passion for digitization and an enthusiasm for IT. Together they went one step further and implemented a holistic multi-cloud project.