And suddenly uni was closed ...

At the end of February this year, my practical period at Bechtle came to a close. I was really happy to be able to see everyone from my course again and begin the second semester with the theory part at the Cooperative State University of Baden-Württemberg in Mosbach.

As soon as I had been there a week I already felt at home with the uni day. But the semester ended as quickly as it began. After precisely two weeks of in-person lectures, we (along with many others) received a message that the semester would continue online for the next few weeks. At first we couldn’t imagine what online learning would be like, but were thrown in head first and there was nothing else to but accept the new concept.

In all courses, we were given scripts that we then able to work on independently in our own time. Our virtual lectures were held as per our timetables and with the subject lecturers. As we were given self-study from the middle of march and our exams were coming up two months later, we had quite a lot to learn in this time. In some cases, we were assigned the entire learning material all at once. 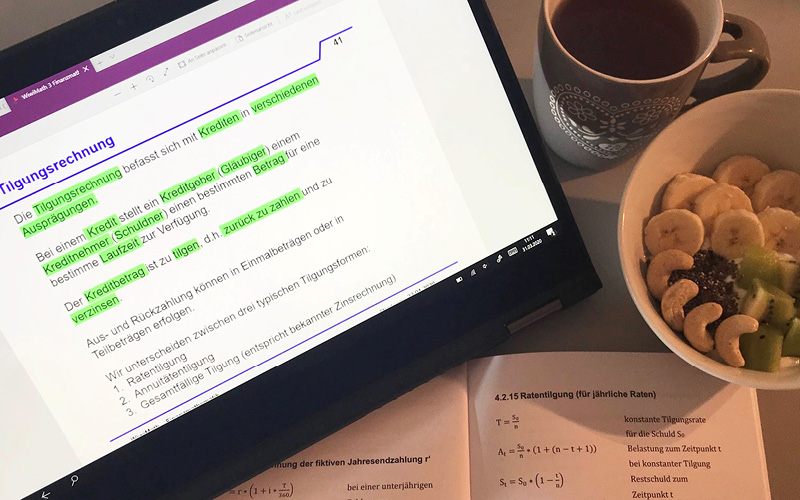 My five tips that I found helpful:

At the end of the theory phase, I was faced with seven exams that I had to take online from home. Thanks to my preparation, my exams were doable and all in all, I found self-study better than I had expected. In time, you find your rhythm, new methods, and know best how you can best learn what you have to.

Many of you probably found yourselves in the same situation over the past two to three months. After having this experience, I can tell all of you on the same journey: Be open to new things and try to make the best of unknown situations! It might even turn out better than you expected!

In our new series of blogs “Five questions for …”, we’ll be meeting colleagues from a variety of departments to get an insight into their careers at Bechtle. We are kicking off with Bianca Tufano who is an account manager taking care of some 20 public sector customers, and in our interview she reveals what got her started on a career path in IT and what makes working for Bechtle so special.

Halftime – how is it

Amazing how quickly time flies. Now I'm halfway through my apprenticeship, only one year left until the final exam!

I am Jana and have been working for Bechtle since the beginning of 2018. I started as an intern during my studies at Heilbronn University. Afterwards, I stayed with the company as a working student and also completed my Bachelor's thesis in cooperation with Bechtle. I now work as an HR Specialist and am responsible for internal HR communication.

Alexander Schweitzer describes himself as a straightforward guy, and his career at Bechtle is a case in point. Ten years ago, his first day at Bechtle also happened to mark his first venture into IT. Fast-forward a decade, in 2021 he’s one of two managing directors of Bechtle direct. When you look closely, though, his trajectory didn’t always follow such a straight line. In fact, when he first joined Bechtle, it took a surprising turn.

In this blog post I would like to tell you about my third theory semester. That was a few months ago - at the moment I'm in the practical phase in the new semester.

Melanie Schüle – From a career change to a leader

Making the impossible possible, picking up where others leave off—these are the qualities that make Melanie Schüle stand out. She joined Bechtle 18 years ago and she has been Head of Bechtle Clouds since October 2018.

Bechtle's employees are the most important player in our Vision. The company is a place where great people accomplish great things. These are some of their stories.

Our AZUBIs are our brand ambassadors and report on their training or dual studies. You will get to know them on this page.

I am Julia Schirrmeister and I studied at the Heilbronn University. Since September 2019 I have been working as Human Resources Manager in the expert team Recruiting. My tasks include university marketing, statistical evaluation of career pages and various HR projects.

I’m Marie Wickinghoff and have been at Bechtle since September 2018 working in training and pupil marketing. In this role, I’m the initial contact for our AZUBIT initiative, creating job ads for trainees at the Bechtle locations and organising a range of events for pupils.

Everything but ordinary – From financial services to beekeeping

Stefan Tensing has been working as head of the treasury and insurance department at Bechtle Gaildorf for eight years, but Bechtle also has a role to play in his personal life. It was around five years ago that his employer introduced him to his new hobby—beekeeping. His passion to do everything he can to prevent bees from dying out makes him a person who is anything but ordinary. We sat down with Stefan to find out a bit more about more about both aspects of his life.

I joined Bechtle in July 2018 as a System Engineer and since then I have been able to gain experience in both deployment planning and administration. In my current position, my organisational talent and curiosity are an absolute asset. Through the newly acquired tasks of marketing and event management, I always try to keep in close contact with our initiators in order to work out ideas and current topics.