From starting out at a high school in China to my CCIE Security certificate in 2019. 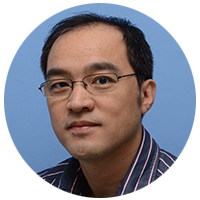 My beginnings in IT.

After finishing my A-levels in China in 1999, I had to decide what I wanted to study. In China, you don’t choose your study path based on your interests, but rather on what will get you a good job. My parents chose IT for me, even though we had only got to grips with the DOS system in school. Once I’d completed my studies, I worked in China as a systems engineer and became familiar with network technology.

Studies in Germany and my first certifications.

I came to Germany in 2007. I learned the German language and after completing my vocational A-levels in 2009 began studying Computer Networking at Furtwangen University in 2009. At the same time, I took Cisco CCNA online training. After passing the CCNA Routing Switching exam, I knew that I wanted to develop my skills in network technology further, so in 2012, alongside my German studies, I successfully completed a CCNP certification (routing switching).

After my bachelor thesis, I was kept on in the consulting company where I wrote my final assignment, where I started to explore routing and switching. After a year, I was asked if I wanted to do a CCIE certificate, to which I replied “why not”—without really knowing what I was letting myself in for. In the following six months, I absorbed information about the technical background and setup a virtual lab for my CCIE routing switching. In the last three months leading up to the exam, I invested a great deal of time in practising. In the final two weeks, I spent days at a time in the lab.

The day before the exam, I flew to Brussels. Even today, so many years later, I can still remember that time. On the big day, early in the morning, me and the other six nervous test sitters entered the Cisco exam room. I took a deep breath, and began the first troubleshooting exercise.

Late that night, I received my result—PASSED! I couldn’t believe it was true until I had refreshed the page ten times!  Back then, I thought I could never complete another CCIE...

In my job, I implemented more and more security projects and, with time, moved into the team responsible for them. This is a topic that is constantly evolving and where you have to work hard to stay up-to-date far more than with routing switching. In this time, I learned a great deal about new technologies and implemented them for customers.

To hold onto a CCIE title, you need to complete regular recertifications, so I came up with the idea of attempting the written CCIE Security exam. Once I had passed the exam, I began considering whether I shouldn’t just do the CCIE Lab exam too.

Deciding to do it was really not an easy decision for me, especially as I had become a father of two in the meantime. Moreover, my decision came at a time when I had resigned my job and was joining Stemmer.

I spoke of what I was considering in the interviews for my new job. Stemmer’s response was overwhelmingly positive—which fuelled my motivation even more. In August 2019, I took up my new post and with the full backing of both Stemmer and my wife, I began preparing for the second CCIE—CCIE Security.

I had hardly began preparing when I learned that Cisco would be completely reworking their CCIE exams from early 2020. I was torn—could I manage to pass the exam before the end of 2019? If I didn’t pass on my first attempt, it meant I would have to start preparing from scratch for my second go! When I first tried to sign up to take it in 2019, there were no free spaces. Two weeks later, however, I found out that someone had dropped out and that I was in—meaning that I had only two months left to be ready.

With my experience from the CCIE Routing Switching exam, preparation went quite smoothly, but I still practised every night of the two months for five or six hours in the CCIE lab. Again, I flew out to Brussels the day before. On the day of the exam, I was waiting nervously with 20 other CCIE candidates for Cisco’s exam room to open.
Finally, this exam was over too, but there still wasn’t time to relax—I waited for the result. I checked Cisco tracking every ten minutes, until four hours later, I finally saw the word “pass” come up on the screen. I had passed the CCIE Security exam on my first attempt. And this time, I swore never to take another CCIE exam again...

Vocational trainee position, dual-study programme, in-house and external training courses—there are so many ways to discover something new and grow, both personally and professionally. For Marie Wiethase, Account Manager, Bechtle Hanover, combining the job with training opportunities is typical. She has had several irons in the fire since 2017—and isn’t planning on cutting back any time soon.

Digitalisation in German SMEs – Are we really stuck behind the rest?

The figures speak for themselves. Whether it’s the number of patents, the use of modern IT technology or the degree of digitalisation in companies—Germany, its SMEs in particular—is stuck in the middle field. People are saying that German SMEs are running out of gas, and their lack of progress is endangering other branches of industry, for example production. But let’s be honest – Is this really the truth?

Everything but ordinary – behind the scenes in professional sports
IT Insights

A few years ago, artificial intelligence (AI) would have been spontaneously relegated to the realm of science fiction. Today, more and more companies are making concrete investments in AI to secure competitive advantages. This often involves service improvements, faster provision of information, optimized processes or completely new business models. And these are not only interesting for large corporations, but also for small and medium-sized enterprises.

Thorough analysis yields valuable insight, which is why our business architects examine all key parameters. Discover what exactly they look at.

Our work doesn’t end with implementation, and our IT business architects won’t rest until everything is running smoothly. Read on to discover what this entails.

There are just five simple steps between you and the start of your Bechtle career. Find out more about our application process!

Thumbs up for AI

Now order is coming into the discussion. Until now, opinions on artificial intelligence have often hovered at the extremes: Science fiction-inspired horror scenarios on the one hand, saviors for humanity's global problems on the other. There's no doubt about it: AI polarizes. And meanwhile, the technology of the future is creeping more and more into our everyday lives and our working world.

I am a trainee in the sales department of the Bechtle IT system house in Bremen. It was clear to me early on that I wanted to go my way in sales. My enthusiasm for IT began at a very early age and was consolidated by my enthusiasm for technical innovations. Currently I am passing through various departments during my traineeship.

I’m Marie Wickinghoff and have been at Bechtle since September 2018 working in training and pupil marketing. In this role, I’m the initial contact for our AZUBIT initiative, creating job ads for trainees at the Bechtle locations and organising a range of events for pupils.

Anything but ordinary: Artistic roller skaters and Bechtle suppliers under the microscope
Artificial Intelligence ▷ Opportunity and challenge | Bechtle

Invest in artificial intelligence ➥ Opportunity and challenge ✓ Benefit from advantages ✓ Learn from us what you need to do it.