There’s a competition that’s all about IT, a topic I’m passionate about? Where do I sign up? This was my reaction when I first heard about SwissSkills two years ago. One thing was clear. A lot of hard work and skill were needed to get there. 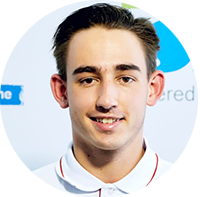 What’s it all about?

SwissSkills is the name given to the Swiss championships in a range of professions that takes place every two years. To qualify, you first have to take part in the regional championships. Some 300 trainees from all over Switzerland take part with the top 10 in the current year and the top 10 from the previous year qualifying for SwissSkills. The medallists from the previous SwissSkills are also invited meaning that a maximum of 23 people can take part.

So, I had a target, but how was I going to reach it. The first step was to prepare for the regional championships that cover three subject areas: Networking, Windows Server and Linux Server. Networking and Windows Server weren’t going to pose too big an issue as they were part and parcel of my daily work, but Linux? We’d had a module on Linux at school, but would it be enough?

I started to build virtual labs at home by configuring virtual routers, switches and, of course, all Windows and Linus servers. Linux was by far the most complex because there’s no GUI so you have to know the commands by heart. This was definitely the biggest challenge for me at the start, but after a while I got the hang of it and ventured to try out the preparation tests you can use to simulate exam conditions.

We were given three hours to solve a variety of problems and the exam was very similar to the preparation tests with the only difference being that specific services that I had no experience of had to be installed and configured on Linux. After 2.5 hours, it was finally over. I’d managed to nearly completely solve the network tasks and when it came to Windows, there was only one GPO setting I hadn’t been able to find. There were, however, several things that didn’t work on Linux.

The results weren’t published until August, but the wait was worth it. I made 5th place and had therefore qualified for SwissSkills in Bern on 11 September.

Two colleagues and I set off for Bern at 5:15am. Once we’d picked up our championship shirts, we were all set. After a short speech from the organisers, we were off to the tournament room to find the workstation we had been assigned. The competition kicked off at 8:15am. I read through the tasks and was a little surprised that none of what had been covered in the preparation tests for Linux was going to be included. I started by setting up the various Windows servers and firewalls, losing a lot of time to issues related to the servers not being able to reach each other. Thankfully, the networking section was much easier and I was able to complete nearly all tasks without too much trouble.

After lunch, I carried on with the Windows Domain Controller, but here there were several problems. I kept on getting error messages I’d never seen before when adding clients to the domain so I had to set up the server again completely from scratch losing crucial time I could have used for Linux. Thankfully, it then worked and all I had to do was finish configuring the firewall, which gave me no bother.

Now, with not much time left, I could focus on Linux, but, with just 20 seconds to go, the Hyper-V server crashed because the firewall running on it lost its configurations. Something that ultimately cost me lots of points.

The exam was over at 4:15pm. I was so annoyed that I’d lost so much time on some tasks, but my colleagues also felt less than confident. We didn’t have much time to mull it over though because we had to go straight to a photo shoot for social media and our personal photo album. At 4:45pm, we were heading home.

The results were published two days later. Unfortunately, I’d only placed 20th and I have to admit I was very disappointed as I’d expected a lot more from myself. But they say setbacks can make a person stronger, so I’m going to try and learn from my mistakes and be better. No matter the result, it was definitely worth taking part in SwissSkills. Experiencing this level of stress and tension and competing against like-minded people was a one-off experience.

12 May
3D printing – One technology, uncountable opportunities.
According to the Additive Manufacturing Trend Report 2021 published by 3D Hubs, mechanical engineering companies purchased or produced 65 per cent more 3D-printed parts in 2020 compared to 2019. This boosted the estimated value of the 3D printing market to $12.6 billion in 2020 and there is no end to this growth in sight for the next five years according to the researchers. In 2026, the 3D printing market is estimated to reach a value of $37.2 billion. What is the reason for this development?
Read
30 Mar
Cisco Connect 2021 – We were there!
This year’s Cisco Connect Germany took place online on 16 March with the motto “Possibilities”. The successful 2.5 hour event was attended by 6,000 people. Here, we’ve put together a brief summary of our contributions for you.
Read
More posts

I am Julia Schirrmeister and I studied at the Heilbronn University. Since September 2019 I have been working as Human Resources Manager in the expert team Recruiting. My tasks include university marketing, statistical evaluation of career pages and various HR projects.

Everything but ordinary – The ultra marathon challenge

Vienna? Of course! Salzburg? Beautiful. But have you ever been to Graz? For many international travellers, Graz still seems to be an under-the-radar stop on the tourist trail. Austria’s second biggest city combines avant-garde and the traditions, futuristic buildings and traditional costumes with ease.

After studying virtual and augmented reality technologies (VR/AR) from a scientific point of view for four years as part of her doctorate, it was clear to Mara Ortner that she wanted to promote their use. At Bechtle Karlsruhe, her focus is very firmly on these technologies when it comes to the Modern Workplace. In our interview, Mara gives us a look behind the scenes of her working day and her sporting pursuits, and tells us what makes Bechtle a stand-out employer.

We know, Frankfurt doesn’t have the best reputation. The city located on the banks of the River Main is seen as boring and ugly, the inhabitants small-minded and the night life practically non-existent. Maybe Frankfurt is the kind of city that grows on people, slowly stealing their hearts. Because no matter what you’ve heard, Frankfurt is warm and welcoming.

Current information on the application process

Halftime – how is it

Amazing how quickly time flies. Now I'm halfway through my apprenticeship, only one year left until the final exam!

Answers to your questions.
sz-solingen

A week around “my workplace and the world of work”

Every Bechtle trainee can take part in this seminar. What took place in a conference hotel before Corona was carried out virtually over two days this year. Still a nice experience!

Everything but ordinary – From financial services to beekeeping

Stefan Tensing has been working as head of the treasury and insurance department at Bechtle Gaildorf for eight years, but Bechtle also has a role to play in his personal life. It was around five years ago that his employer introduced him to his new hobby—beekeeping. His passion to do everything he can to prevent bees from dying out makes him a person who is anything but ordinary. We sat down with Stefan to find out a bit more about more about both aspects of his life.