Protecting your brand, locking out frauds.

For many companies, the ability to succeed and grow revenues depends on a loyal customer base. When your customers are happy with your product or service, when they can relate to your company, that’s when they return to you rather than turn to the competition. That’s why companies spend a lot of time and money on customer relations. And it’s also why the damage can be devastating when criminals break into corporate accounts and end the bond that took so long to build. So how can you prevent frauds from bruising your reputation in the first place? We’ll show you how you can help your employees protect the integrity of your brand and what steps you should take right now. 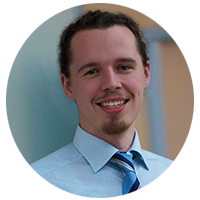 To create loyalty, companies rely on a great variety of different measures. One prominent and important tool is effective communication through e-mail and social media. Companies need to generate a steady stream of content to keep customers engaged. And of course, every post should add value for the customer. If it fails to be useful, exciting or interesting, information is simply dismissed as advertising. But if you want to build a positive customer relationship, advertising alone won’t do. What it takes is entertainment. A happy customer is one thing, a loyal customer, on the other hand, is one who won’t turn to another company even when their product may be on par with yours. Creating this kind of relationship typically takes a lot of strategy and teamwork.

When criminals hack their way into corporate accounts and end the bond that took so long to build, the damage can be devastating. Customers expect their data to be protected. If they lose confidence in your ability to do that, they will turn away. Phishing and other scams have been on the up in recent years. According to a 2018 Statista study, 30% of Germans had fallen victim to identity theft. 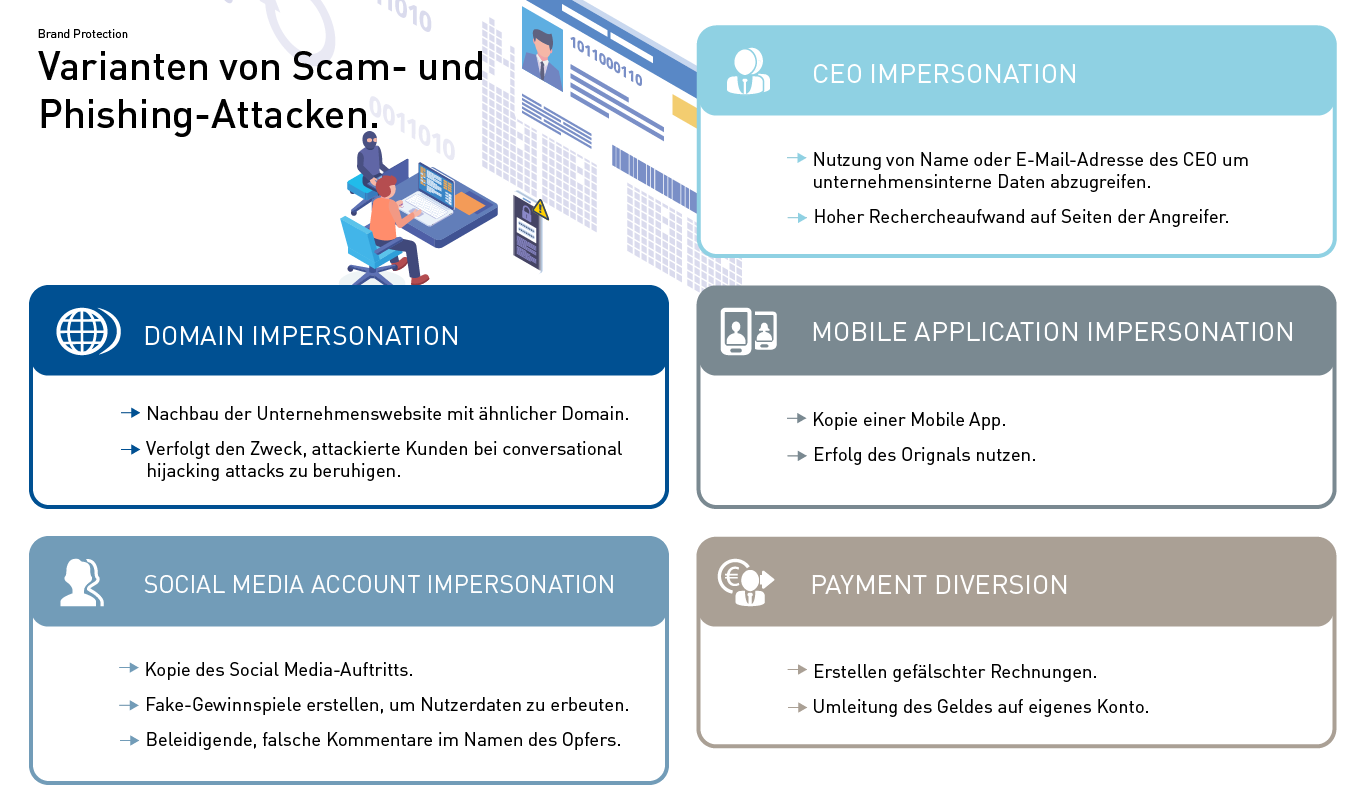 The faces of internet scams and phishing attacks.

While firewalls, antivirus software and password protection are all a given in most companies today, efforts to protect the brand image against digital threats are still relatively small. All the same, digital brand protection should really be an integral part of any company’s digital strategy, just like the protection of corporate networks and virtual infrastructures against hackers, malware and virus attacks. Companies spend big money on the latter, but relatively little on safeguards against imitation or the development of a contingency plan.

Digital brand protection encompasses all the steps a company takes to prevent criminals from appropriating its brand, to protect its intellectual property, and to nip attacks against its name and image in the bud. If a company fails to build sufficient defences, the repercussions of a cyberattack can be catastrophic.

The case of an automotive components supplier stands as a cautionary tale of CEO fraud, in which the company’s CFO wired an eight-digit sum to a fraudulent account in response to an e-mail forged to look like a genuine payment order to the parent organisation. The resulting negative PR, the attack itself, and the efforts to contain the damage all added up to a loss of trust on the part of the customers and long-term financial losses.

Account impersonation is also a thing on social networks, where customers are led to click on links that download malware, or indeed enter their personal information directly. A perceived chance to win prizes is all it takes. Attackers can then easily monetise the sensitive information they have obtained, which may even include the credentials for user or bank accounts. It goes without saying that the trust a victim had in the company takes a hit that won’t easily heal. 42% of people who have experienced a phishing attack change their preferred brand in the aftermath. Customer loyalty takes a nosedive while budget spent to manage the crisis goes through the roof and the attack can leave a permanent mark on the books.

Impersonation and the consequences for a business. 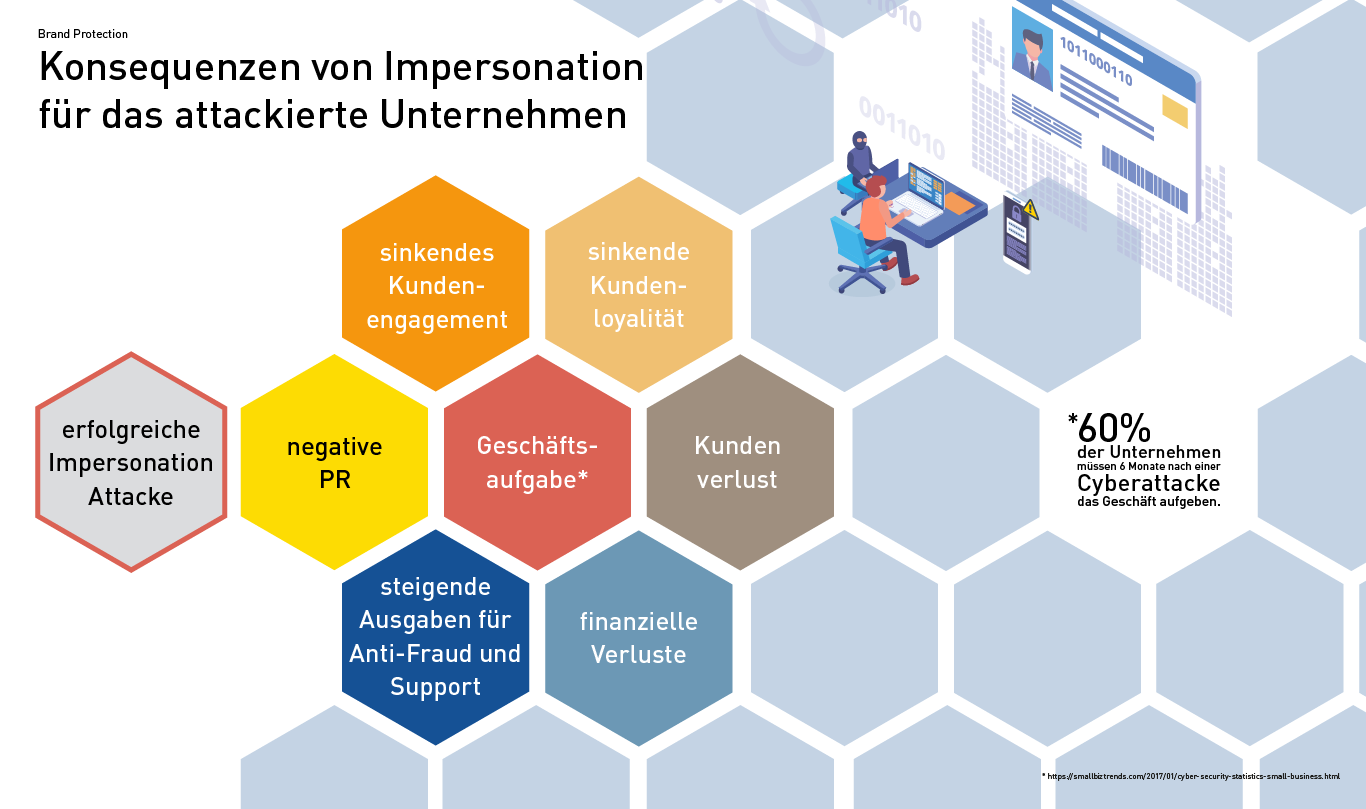 In order to prevent impersonation or at the very least be able to react quickly when it happens, your safeguards must be locked and loaded at all times. This means your employees must be aware of the tell-tale signs and harbingers of a cyberattack, and the potential consequences of a successful breach, too. It is important that a campaign to raise awareness reaches every one of them and allows no exceptions. That little branch office abroad can be the gateway for an attack that targets your entire organisation. Consistent monitoring is also imperative to quickly detect attempted fraud and stop it dead in its tracks before any significant damage can occur, or worse yet, you learn about it from affected customers. It’s always better to act than to react, but if the damage has been done, it is important to be able to contain it and restore your customers’ trust.

The good news is that modern technology is available to support an aggressive strategy to prevent misuse of your domain, your e-mail communications, and your brand itself. It can shut down any suspicious activity to get your business out of harm’s way. For instance, cloned website detection can help you prevent a phishing campaign even when it is run from a forged copy of your website that resides in a different domain. Domain-Based Message Authentication (DMARC) shrinks the risk of fraudulent e-mail communication, and DNS Certification Authority Authorization (CAA) ensures that cybercriminals can’t obtain unauthorised digital certificates. Both DMARC and CAA have an integrated feedback mechanism to alert domain owners of attempted phishing and impersonation attacks. And should worst come to worst after all, well-prepared and comprehensive crisis management is key to coming out unscathed.

What to do if your customers were hooked by phishers?

1. Communicate the incident to your customers as soon as possible.

A capable partner can be invaluable when you build your cyber defences. Bechtle is your first choice for expert consultation and support in (re-)design, planning, implementation, operation and review. Extensive vulnerability management helps you identify areas where you have to take action.

One of the most important elements in a prevention strategy is employee awareness. But how can your employees learn how to identify scams early on and shut the digital door on cybercriminals?

08 Jun
Advanced persistent threats – Responding to sophisticated attacks.
Power stations, registration offices and innovative SMEs are rewarding targets for hackers and attacks on critical infrastructure can have severe consequences including power cuts, stolen data, industrial espionage. To stop attacks in their tracks, Bechtle’s experts work around the clock to protect your IT systems. If there should be a security incident however, it pays to be quick out of the blocks and as a qualified APT response provider, this is where we come in. Read on to find out how we can help you defend yourself against advanced persistent threats and how these attacks unfold.
Read
28 May
Critical vulnerability in VMware products – We’re here to support you.
VMware has reported severe vulnerabilities that impact all current versions of vCenter Server and Cloud Foundation. The issue has been evaluated to be critical and customers are being urged to patch their systems. A workaround is also available.
Read
03 May
On a secure footing.
Attacks on IT infrastructures are no longer the exception. Every day, an uncountable number of businesses fall victim to cyber criminals with the BSI Situation Report 2020 describing 117.4 million new, previously unknown versions of malicious software. That equates to more than 320,000 each day. In order to serve their purpose, they naturally have to spread and that means we see the same situation play out over and over again—an employee receives an e-mail and opens it without thinking. The result? Disaster. Carry on reading to find out how you can get your company onto a secure footing.
Read
22 Apr
Advanced security framework for data centres and hybrid clouds.
Businesses are striving to make better use of their IT resources and ready them for the future with the latest and best security technologies to reconcile them with their own cloud transformation. We’ll show you how it’s done.
Read
14 Apr
Holistic data centre monitoring with PRTG.
No matter if in the cloud, as a hybrid solution or on premise, at the end of the day, IT is on physical computers housed in a building. In other words, a data centre. To make sure a data centre operates smoothly, it is essential to keep an eye on a whole raft of components within the IT infrastructure and in the room itself to pick up on any potential vulnerabilities early and, therefore, precent issues, damage and even outages.
Read
18 Mar
Keep attackers under pressure – Minimize dwell time with behavioral analysis.
On average an attacker snoops around in the environment they’ve hacked for 56 days before being detected. This means reality diverges greatly from what is often portrayed in the media with the good guys and the bad guys in a race against time and each other. The reason for this, however, is not only to create drama in films and reports. In reality, the reason why criminals can wreak havoc undetected for long periods of time is because many companies’ networks are spread over several locations and have different responsibilities and their services are not always as up-to-date as they should be. The aim must therefore be to expose attackers as quickly as possible, which is where behaviour analysis and device identification came into play.
Read
12 Mar
Field Notice from Cisco – SSD failure after 40,000 hours operating time.
Cisco has published an important field notice related to an issue with certain SSDs built into UCS servers. This includes appliances built on UCS servers (such as DNA Center and ISE).
Read
More posts