Firefighters’ eye in the sky.

Emergency services, particularly firefighters, are getting a significant boost to their capabilities in the form of Fotokite—a drone that collects aerial pictures of the seat of fires using its thermal imaging and standard cameras and transmits exact live images via an ultra-thin cable to the crews on the ground. This doesn’t only significantly simplify the assessment of the situation—it saves lives. The one-of-a-kind system was built with the SOLIDWORKS 3D CAD solution.

The idea is as simple as it is impressive. Reminiscent of a kite, a thermal imaging camera attached to a drone is positioned over a burning building. This enables the firefighters on the ground to localise the seat of the fire and find anyone still inside the building, thus optimally organise their fire-fighting efforts. Fires can be more quickly extinguished, those trapped more rapidly saved and the firefighters themselves protected from unnecessary dangers. Perspective Robotics AG’s Fotokite drone has made the dream a reality.

The Swiss-American start-up—a spin-off company from the Swiss Federal Institute of Technology (ETH) in Zurich—has been researching and developing the concept since 2014. CEO Chris McCall made the move from San Diego Bay to the banks of the Limmat River to drive forward his vision of a rescue drone. “Zurich is way ahead when it comes to drone research. There is enormous potential for cutting-edge research and development in the field of flight robotics here.” Full of pride, he goes on to list the benefits of the Fotokite compared to free-flying alternatives. “The fact that the Fotokite is wired means it’s connected to an energy source and can therefore stay in the air indefinitely, and without any heavy batteries, it’s pretty safe. Plus there aren’t the same worries about fly-aways or crashing because our system doesn’t rely on GPS or RF communications.” 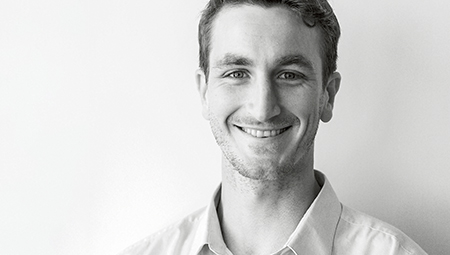 We are offering a stand-alone system that can be used at anytime, anywhere.

An idea takes off.

The Fotokite Sigma has been in the test phase since 2018 and consists of a suitcase-style ground station and a hexacopter—a drone with six rotors. On board, there are both thermal imaging and a standard video cameras. The cable’s maximum range is 45 metres and the whole system is controlled from a ruggedized tablet. The altitude and cameras are easy to configure while take-off, flight and landing happen fully autonomously at the push of a button. This means the emergency services can fully concentrate on analysing the images and deciding the best course of action. When a response is finished, Fotokite returns to the ground station. “We are offering a stand-alone system that can be used at any time, anywhere”, explains Chris McCall.

What in principle sounds easy—arrive on scene, push a button to launch, set an altitude and away the drone goes—was actually very tricky to realise according to Chris McCall. Up to 50 specialists aren’t working on the system for nothing. The team includes aerospace engineers from Bavaria, flight controls specialists from Switzerland and Italy, and American robotics specialists in New York and Colorado. The common language is English and the common construction tool is the SOLIDWORKS 3D software solution.

“The 3D CAD software we use is very intuitive”; says Chris McCall. “Even those who have never worked with it before quickly get the hang of it”. From carbon frames with integrated electronics to the sheet metal for the camera mount, all in-house mechanical designs have been constructed using SOLIDWORKS. One of the biggest challenges was the spooling retractor mechanism for the cable that keeps the Fotokite tethered to the ground station. The cable doesn’t only power the drone, but also transmits control signals so that, for example, the exact altitude can be set. At the start, the team experimented with several concepts, and as time and reliability testing went on, it became clear which mechanical solution would be best suited to the job. “We designed this pretty complex electro-mechanical mechanism with SOLIWORKS”, says Chris McCall. “It was one of the ground station’s most intricate systems.”

Keeping up with innovation.

Thanks to SOLIDWORKS product data management, multiple users can work on the project in parallel without causing chaos, which is particularly important at start-ups where a lot is happening—day and night. While the drone’s rough shape, maximum total weight, and how it would work were determined early on, improvements were made almost every day. SOLIDWORK’s central data safe helped keep Fotokite’s construction data safe and sound. Personalised access rights guarantee that the right user can access the data at the right time while version controls ensure that everyone involved is working with the latest version to prevent errors and having to re-work the 3D model. Interim versions can be defined without having to go without potential additional improvements.

The go-to-market strategy also looks promising. Perspective Robotics AG, headquartered in Zurich with branches in Syracuse, New York, and Boulder, Colorado, has already received extensive recognition for its vision with the start-up being awarded the 2015 Qualcomm European Qprize, winning the 2017 euRobotics Tech Transfer award, and coming first in the Genius NY competition in 2018. Attracted by this success, Credit Suisse and Sony have recently invested in Perspective Robotics. However, the most recent accolade and greatest commercial success has been the integration of the Sigma models into vehicles made by Pierce Manufacturing which is one of the leading suppliers of fire engines in North America. Chris McCall: “The operational freedom given to public safety teams in the US is one of the reasons for the growing success of the product over there. This means that firefighters and public safety teams can use the Fotokite system in real-life scenarios without significant barriers related to regulations and training. We have recently begun expanding into additional markets as well, and are excited to serve the public safety teams across Europe moving forward.” 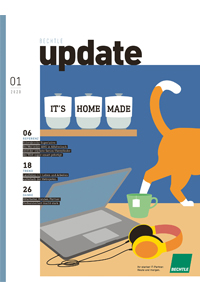 This is an excerpt of an article in the print edition of Bechtle update 01/2020.

It can see, hear and walks on uneven ground quickly and independently, avoiding obstacles and helped its inventors to win the Swiss Economic Award 2020. ANYmal is a four-legged inspection robot—the creation of the high-tech company ANYbotics based in Zurich—used predominantly in large industry where the safety of employees is as much a top priority as high productivity. To get its robot up and running, the young company turned to SOLIDWORKS’ broad portfolio of application solutions.

Changing the world, one disruptive innovation at a time

Since 2019, Germany has had a Federal Agency for Disruptive Innovation (SPRIND). An authority that wants to be “a home for people with radical ideas.” How does it work? In an ideal world, it means great ideas being turned into huge advances with digitalisation, of course, playing a crucial role. It can be of no coincidence then, that there are certain crossovers with Bechtle projects.

Freiburg is one of those places people always say is beautiful and where the sun always shines. In fact, it’s pretty easy to wax lyrical about Germany’s southernmost city and no other place comes close to Freiburg’s magnificent landscape and picturesque old town with its labyrinthine alleyways and happy, bicycling residents. What can we say? It’s true. Freiburg really is beautiful.

Four use cases with the mixed reality headset, HoloLens 2

Augmented, virtual or maybe mixed reality? Three terms that most of us have heard or read about. When you scratch beneath the surface, however, it quickly becomes clear that there is a great deal of uncertainty about what exactly they are. But more importantly, there is a lack of understanding about how these technologies can be leveraged to the benefit of businesses.

Freiburg is one of those places people always say is beautiful and where the sun always shines. In fact, it’s pretty easy to wax lyrical about Germany’s southernmost city and no other place comes close to Freiburg’s magnificent landscape and picturesque old town with its labyrinthine alleyways and happy, bicycling residents. What can we say? It’s true. Freiburg really is beautiful.

Efficient instruction with the Microsoft HoloLens 2 and Dynamics 365 Guides

Forced to sit through yet another monotonous training video because there’s been a tiny change in production? New to the company and left to your own devices to plough through e-learning materials? What do we actually learn from these kinds of training? Probably not a lot. Numerous studies confirm that people learn much more when they take part in interactive training courses, in which they themselves have to roll up their sleeves and get involved.

For the efficient and ergonomic planning of the production line, STÖBER tested prototypes on a Bechtle-installed virtual reality solution—saving money in the process.

Develop strategies, harmonise teams and even fly to the moon—with gamification

You probably remember building castles in the sand or houses with blocks in your childhood bedroom, or have watched your children play house or shop. This childish sense of fantasy is something that grown-ups still have and can use to their advantage in business.

Meet us in metaverse.

Large social media companies have it in their names, digital art worth millions and mega-concerts on gaming platforms are fueling the hype: the "metaverse". Possibly a new version of the Internet, Web 3.0 or a new digital continent - we asked around about its significance for business IT and found what we were looking for. Data glasses on, JoinXR platform on, and off we went: Dr. Mara Ortner, Modern Workplace Consultant AR/VR at Bechtle IT System House Karlsruhe, and Carina Kaiser, Product Manager Microsoft Surface and HoloLens at Bechtle, explain where the journey is headed and how companies can get started.

What makes conversational AI a better chatbot? A brief guide

We have conversations with artificial intelligence both in private with voice assistants like Alexa, Siri, and the others, but also in our professional lives. We often don’t even really notice it. Many of our customers use conversational AI bots for their helpdesks, for example. But why is it “intelligent” to process a simple command to set up a printer, for instance? Well, it’s not that simple.