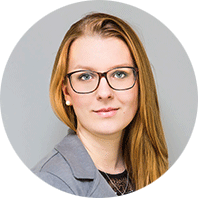 So we needed to bring the digital workplace to customers—virtually. But simple videos or meetings where they could only view the room were too simplistic. We needed another, more innovative solution. The watchword here was virtual reality, and after some head-scratching, a concept was born—customers needed to be able to enter the room virtually and engage with content.

It became clear to us that customers needed VR headsets. But an actual VR headset was not an option. They are large, expensive, and above all, how were they supposed to get to the customer? So we opted to use cardboard VR glasses. You simply slot these cardboard glasses together, insert your smartphone in the front, you're ready to start your virtual experience. Branded with the Bechtle logo it's a great freebie item!

The plan was ready—in theory. Now they we needed a practical solution for implementation. We hit the jackpot with the Virtual Reality Suite from Present4D which lets you combine 360° images and videos into virtual presentations. Presentations can be complemented with media content such as images, videos, PDFs, 3D objects, and CAD files.

The Virtual Reality Suite is particularly attractive as it enables presentations to be shown on various end devices. The immersive version uses traditional VR glasses or, in our case, cardboard VR glasses and a smartphone. And there’s an app for Android and iOS. There’s one for the PC, too, letting you view your project on your computer, albeit with less immersion. You can also export your presentation in HTML format to embed it on a webpage.

The solution was ready, it just needed to be populated. Designing the tour was the first task. Where should the 360° recordings be made and what should be included? We were then able to take the finished design to concept production. Making the 360° recordings with the right type of 360° camera was new territory for us. We needed to ensure that no one was in the frame when recording—which is easier said than done in 360°!

The finished recordings could then be put together to make a tour and we were one step closer. So now we were able to jump from location to location, but the individual segments were somewhat bare. So—more content was needed. We added in more videos, product datasheets, and a 3D model freely placed where we wanted in the space and making the tour that bit more interesting. Explorer mode on!

Project completed—great! What now? Present4D made this part easy, too. The project is loaded into the cloud and then accessed and downloaded via the app with a six-digit portal code. And to make it even easier for our customers, we included a how-to guide including QR code on the cardboard glasses. In two easy steps they could access the tour—slot glasses together and download the app. Everything they need to take a virtual tour of the Karlsruhe Digital Workplace!

Presenting a company or, in our case, a room in 360°, experiencing it live through VR glasses, and interacting with products and information—a really impressive experience! We learned a lot of new skills during this project, let our creativity reign free, and hopefully were able to bring a little joy and fun to our customers!

Want to find out more? Get in touch with your Bechtle account manager or visit our Digital Workplace at Bechtle Karlsruhe—now available digitally!

The portal can be loaded with multiple projects that automatically appear in the app to be downloaded. What does this mean? It certainly won’t be our last project...

24 Jul
Brussels Calling – My CCIE trip.
From starting out at a high school in China to my CCIE Security certificate in 2019.
Read
30 Jun
167 hours, 59 minutes and 58 seconds – The longest football match in the world.
As a VIPM for vendor Axis Communications, I am used to receiving creative request for video and audio solutions. But the call I got in Spring 2019 from my college Steve Cottone, Bechtle IT Systems House Saarbrucken, surprised even me. Our customer, Dirk Stiwitz, wanted to organise the longest football match in the world...
Read
More posts
Stay Productive - How can Google G Suite support you?

More and more people in companies and other organisations, in addition to students and pupils, are currently being forced to work or study within their own four walls. Together with our partner, Google, Bechtle let you communicate and be as productive as possible when working from home.

Welcome to Mixed Reality: Q&As on the Microsoft HoloLens

As the first and only reseller of Microsoft HoloLens in Germany, Austria and Switzerland, Bechtle offers a full consulting service for using mixed reality headsets in businesses.

Administration and administrability are the be-all and end-all within the diverse Microsoft 365 services. At Microsoft Ignite, new functions were announced that simplify basic handling.

Microsoft Teams: the future is now.

Microsoft has announced it will be pulling the plug on Skype for Business at the end of July 2021. But there’s no need to panic. Microsoft has plans to revolutionise collaboration, having laid the foundation for this back in 2011 with the introduction of Microsoft Teams.

Microsoft Teams, Cisco Webex and Google Meet are the three biggest manufacturers of collaboration tools offering their own suites to meet the requirements of modern collaboration that support the challenges of working in dispersed teams. But which solution is the best for your needs? Let us give you some insights.

Virtual and augmented reality can support us in virtual collaboration, training, and courses. Transform your office into a design studio or production hall. Design data for vehicles, machines, or buildings can be virtually edited, constructed, and modified together. On-site problems can be supported by experts on the computer with the aid of chats, documents, languages, and live videos—wherever you are. Employees can fully concentrate on the tasks they have to accomplish. Something that sounds complex and elaborate can also work for your company. Learn how in this blog.

A Modern Workplace without Collaboration is inconceivable. Microsoft and Cisco are now going down a common path, simplifying the integration of teams and WebEx.

Microsoft Ignite I - Focus on productivity

At Microsoft Ignite, the company’s best and brightest met with partners to discuss everything from cloud infrastructure to the Internet of Things and the Modern Workplace. Florian Vees presents the new developments over four blogs. The first huge topic—productivity.