The classic concept of business IT is based on the image of a company as a fortress. Everything within its walls is trustworthy, everything out-side potentially dangerous. The fortress walls (firewalls) and moats (proxies) protect the company. But not enough. Why? Because we are globally connected, because employees want to and need to work out-side the bounds of the company exactly as they would within the for-tress. The question is how to resolve this dilemma by introducing a Modern Digital Workplace...

Almost all companies are turning to the cloud as the enabler of their digital transformation. This transformation to cloud-based applications and services, large amounts of data, and machine learning brings about new business models and another way of working. The reasons are compelling: Companies that consistently tackle the digital change gain a competitive edge and stand out against traditional competition. Users and the company as a whole therefore demand productivity everywhere and on any device. This includes access to sensitive company data away from the traditional workstation as well as modern business applications such as legacy applications. The latter were created long before the cloud came into being, and are therefore not programmed and toughened accordingly.

The digital transformation only increases the urgency to accelerate innovation in IT departments. Internal IT is a central driver of processes—it’s your IT that facilitates new business models. Cloud and enterprise mobility influence security environments and strategies in many areas including identity management, data security, and application and device management. Processes such as Hybrid Cloud and virtualisation, isolation of services, programs and resources, advanced threat protection, and Software-as-a-Service are just some examples of new and changing tools.

With the help of new technologies, the IT organisation is now in the position to create added value while maintaining appropriate control over growing structures. Legacy applications are often specific to enterprises and critical to business because in some circumstances they still need to be used for many years to come, especially in production.

Gartner Consulting refers to the strategic route to take as “bimodal IT”—two different speeds and technology approaches that can be used as needed. One element is software provision for the Modern Workplace with its requirements of internet and a modern, highly-mobile way of working. The other is provision of an environment for legacy applications in traditional processes, as isolated as possible by various virtualisation technologies. Bimodal IT can be realised on the basis of a hybrid cloud with corresponding technologies.

In addition to new tools, the new technological approaches require organisational and procedural changes. In the past, companies had to continually install new versions of Windows and Office. Patches were run when security problems arose or on a scheduled “patch day”. But no new security features were added until the next version was installed. This gave hackers the opportunity to exploit security vulnerabilities between releases and find weaknesses in the design. Such security weaknesses are especially problematic in this age of advanced persistent threats. Hacker organisations are criminal organisations that want to manipulate systems, steal information, and blackmail companies—that’s their business model. They invest a lot of time and money in their activities.

Traditional IT generally defends itself with tactical security solutions that in turn contain more partial solutions. The problem with this variety is that security vulnerabilities across the entire eco-system are caused by solutions designed to solve other vulnerabilities, above all through changes to the operating system. This is aggravated by an overly complex security infrastructure that requires a lot of time and is difficult to manage—not to mention performance limitations and numerous latencies. In order to really secure Modern IT with cloud, mobility, and new requirements, a suitable technological security model needs to be developed and an appropriate security strategy implemented.

Microsoft is one of the few companies that can increase your level of security with one holistic security strategy. Why? Because Microsoft has more device telemetry data at its fingertips than any other provider. This data provides Microsoft with detailed insights into the action and methods of attackers in the digital world. Windows 10 architecture also relies on hardening, a security development lifecycle, and type 1 virtualisation with containers and sensors.

Because it’s impossible for people alone to evaluate the data constantly captured around the world, Microsoft uses artificial intelligence processes. Thanks to the productivity and affordability of the cloud, Microsoft is in a position to find needles in haystacks: Algorithms search for abnormalities and correlate different information that would otherwise go unnoticed. If the algorithms detect a threat, the response mechanisms kick in and prevent the customer from being compromised. And it’s scalable: The same threat or attack pattern is automatically eliminated for other users too. Additionally, Microsoft is also building its own Cyber Defense Operations Center that provides direct access to thousands of security experts, data analysts, engineers, developers, program managers, and operations specialists, to ensure quick responses and solutions to security threats. Microsoft will thus offer an end-to-end solution approach that is useful both in classic infrastructures and all-cloud architectures.

The Windows 10 operating system is a decisive step towards a holistic model. Deployment of older versions of Windows usually required expensive deployment projects. Windows 10 simplifies this process through extensive automation. At the same time, standardisation and application isolation enable an extremely high level of application compatibility. The bottom line is, if Windows 10 is introduced correctly, you need never install another operating system ever again. 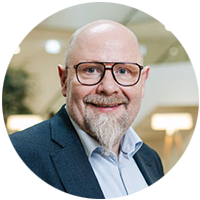 Visual collaboration - no matter with whom, no matter where. Thanks to the Poly Studio X family.

Video conferences from home and across departments are more important today than ever. In the past, a PC or Mac were needed to for videos - either permanently installed in the meeting rooms or the hardware used by the employees. This isn’t a perfect situation as it requires a lot of IT support and creates a lot of frustration when things go wrong. The result? Users avoid making video calls at all costs. The Poly Studio X family is the answer.
Read
26 Mar

Incoming snail mail often moves through a number of departments before it arrives with the intended recipient. In order to take the paper out of the process, organisations need to connect not only departments, but also different sites and, increasingly, mobile employees. The current surge in home office workers is a particular challenge for companies looking to keep their processes running as well as possible.
Read
26 Mar

Lenovo and computing - A tried and tested combination. Lenovo and conference room solutions? An exciting unknown! In 2018, Lenovo announced and launched their promising ThinkSmart range with the long-term aim of building a new Lenovo brand around Unified Communication and collaboration, smart devices and Microsoft Teams. From All-in-One solutions and traditional conference rooms to personal devices, Lenovo has the right solution with the ThinkSmart Hub 500. Read on to find out which innovations Lenovo are bringing onto the market and why they are perfect for conferences.
Read
20 Mar

Stay Productive - How can Google G Suite support you?

More and more people in companies and other organisations, in addition to students and pupils, are currently being forced to work or study within their own four walls. Together with our partner, Google, Bechtle let you communicate and be as productive as possible when working from home.
Read
18 Mar

The current situation presents many companies with considerable challenges. The focus is on possibilities for mobile working in order to make the working day as normal as possible. In this blog you can read how the Agile Desktop can support you quickly and safely in this regard.
Read
17 Mar

If your employees have to work from home due to the current situation, this often mean they face big challenges. In these times, many companies are increasingly falling back on web conference solutions, such as WebEx Teams and Meetings or GoToMeeting, to keep daily business ticking over as normally as possible.
Read
13 Mar

With people being advised to “keep their distance”, employees are finding themselves forced to work from home. But what if they don’t have a laptop? Not a problem, as long as they have any computer at home that connects to the internet. How? Keep reading to find out.
Read
24 Feb

The modern workplace isn’t a tech tool, it’s a people-centric way of doing things. Knowledge transfer and digital learning solutions are core topics of transformation strategies in the digital/modern workplace. Today I want to address an often neglected aspect of the modern workplace, namely the importance of getting your employees on board. I’ll explain what’s meant by “user acceptance” and draw on my own experience to share valuable insight into which concepts and tools are useful and how to get your staff excited about the modern workplace and its cutting-edge strategies.
Read
19 Feb

Dell Interactive Displays - The perfect addition to your conference room.

The times of beamer, whiteboard and co. are coming to an end. Content should no longer have to be photographed with a smartphone in order to send it to the meeting participants via different channels. To what extent Dell can offer you the crucial advantages and increases in efficiency in this respect, you can find out in this blog ...
Read
More posts