The shining star of industry 4.0.
On a completely redesigned production line in Affalterbach, South Germany, Mercedes-AMG is building the peerless turbocharged four-cylinder M 139 engine. At the same time, the intelligently networked assembly process is setting the bar for the future of the industry.

The harmonious interaction of innovative and digital technologies with the expertise of seasoned installation engineers form the foundations of smart manufacturing, a sophisticated IT architecture the backbone, and Bechtle ensures the central IT systems run smoothly with an on-site tailored Business Operations Service.

“One man, one engine” is the performance and sports car brand’s most defining principles. A single AMG technician assembles the complete engine in the AMG engine shop in Affalterbach and is therefore responsible for everything from the installation of the crankshaft in the engine block to putting his signature on the engine plate—a visible sign of the special relationship between manufacturer and customer and a unique quality promise. This is how high-performance engines are produced—in 10,000 square metres over two floors—sometimes purely by hand. By hand? Yes, that’s right, but the work is perfectly embedded in processes with supporting technologies, efficient flow of goods and fastidious quality assurance.

Green light for a new process and logistics organisation.

The assembly of the new two litre, four cylinder turbocharged M 139 engine is the most powerful mass-produced engine in its class worldwide and sets new standards with its sweeping implementation of Industry 4.0 principles. This is abundantly clear in the design of the new production line on the first floor of the AMG facility where the M 139 has been produced since 2019. The assembly cart on which the engines are put together are equipped with all the necessary tools and equipment. The battery-powered screwdrivers are always to hand and no longer have to be wired into the ceiling, which is why the employees talk about “blue sky”. The entire production line is flooded with light and airy and creates the impression of a great place to work.

The project was greeted warmly by the employees from the very beginning and that’s even though a lot of things have been turned on their heads. The expert knowledge of those working on the assembly line and in logistics is as central to our success as it ever was.

From an organisational point of view, networking is essential. Every single tool is connected to the WLAN so, for example, release and torque settings can be automated for each stage of the assembly. “An alternative to the time-consuming process of manual scanning was one of the most important goals of the new design”, says Klaus Mayer, Business Consultant at Mercedes-AMG and IT Project Lead for the creation of the new assembly line. Of equal significance was the deployment of shopping carts that hold all the relevant parts required. The solution is an autonomous transport system that glides quietly alongside the trolley and technician, from one station to the next, with the exact components needed to complete the engine, right down to the last screw. The transport system is loaded up just a few kilometres away in the Mercedes-AMG logistics centre in Marbach before being delivered “just in sequence” to the assembly line.

With performance of up to 310 kW (421 hp), the completely redeveloped Mercedes-AMG two litre M 139 is the world’s most powerful large-scale-production four-cylinder engine, surpassing its predecessor by 30 kW (40 hp). The new, highly-efficient workhorse is manufactured on an innovative assembly line in Affalterbach according to the “one man, one engine” principle.

The indoor tracking system implemented for the first time at Mercedes AMG interacts with the Enterprise Service Bus (ESB) via an interface. The central middleware links the multi-faceted data traffic in the engine production facility. This regulates reliable communication between the systems involved—from the sensors and tools to the ERP system—ensures complete traceability of notifications as well as the loss-free transportation of all production materials. Another central IT system in production is always on hand on the engineers’ tablets. AMGTrace software issues precise instructions for each part of the assembly process to enable seamless documentation of various process parameters. “Every single stage of the engine’s life is stored in the software’s database”, says Klaus Mayer.

The tablet is wirelessly networked and is one of five WLAN devices on the assembly cart, which is significantly more than before. The facility’s network infrastructure is therefore business-critical and is designed to be high-performing. In order to guarantee the stable operation of all IT systems, an on-site support team from Bechtle Stuttgart has been on-premise at the AMG plant since the start of 2019. “Training for the ramp-up phase was incredible intensive as we only had a short period of time to become acquainted not only with the details of the specific applications and systems, but also with the tracking technologies that were new for the customers, too,” explains Martin Straßner, Head of the Bechtle Onsite Team at Mercedes-AMG. Tasks also included operation responsibility for the associated servers and network infrastructures as well as a ticket-based service management. At least two Bechtle specialists are always on hand to carry out maintenance and resolve any issues.

The agility that characterises AMG coupled with the willingness by everyone to try new things inspires us and is definitely a reason for our successful collaboration.

AMG—three letters that represent high-performance, exclusive, efficient and highly-dynamic cars the world over. Mercedes-AMG GmbH has been very successful in the world of motorsport and has cemented their position as an extremely successful performance and sports car brand thanks to their unique designs. The Affalterbach company is wholly-owned by Mercedes-Benz AG and is spearheading the group’s sports car division mercedes-amg.com

As before, people are at the heart of the Mercedes-AMG production philosophy. The latest innovations in digital tools support the employees to do their work as well as possible, resulting in highly-modern production that still has a focus on manual work and handcraft. “The project was warmly received by the employees from the very beginning and that’s even though a lot of things have been turned on their heads. The expert knowledge of those working on the assembly line and in logistics is as central to our success as it ever was”, explains Klaus Mayer. Before the changes were made, the engineers took part in a raft of training and qualification seminars. “The agility that characterises AMG coupled with the willingness by everyone to try new things inspires us and is definitely a reason for our successful collaboration”, says Bechtle Team Lead, Martin Straßner. The well-attuned service management proved its worth so well that Bechtle has also been handed responsibility for IT support of the eight-cylinder engine production on-site.

The new production line also drew a lot of attention from outside of the factory gates. “Daimler Group colleagues as well as numerous partners were interested in the experience we had gained from implementing IoT projects in the field of production. In terms of indoor tracking, for example, we were breaking new ground in terms of scale and the flexibility requirements”, says Klaus Mayer. Processes are highly networked and more data is flowing than ever before and being able to glean deeper insights from these will be crucial in the near future, explains the business consultant. Technologies such as 5G could become additional driving forces. That Mercedes-AMG has already achieved something ground-breaking has been underscored by being awarded “Factory of the Year 2019” by the business consultants, A. T. KearnEy and Produktion magazine. 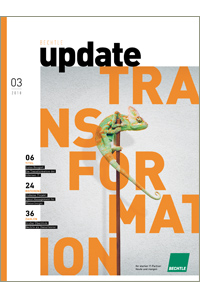 This is an excerpt of an article in the print edition of Bechtle update 03/2018.