The Swiss ecoplane.
Their plans are sky high. Smartflyer AG, led by Rolf Stuber and his team of specialists, wants nothing less than to turn the small village of Grenchen in Switzerland into the cradle of electric aviation. To achieve this, they are currently building their new vehicle with an innovative drive—a hybrid plane—in their workshop.

GRENCHEN IN THE CANTON OF SOLOTHURN, Switzerland, has always been a great place for innovation. Almost everything here is related to the watch industry—it’s the birthplace of the world famous Swatch. For Rolf Stuber, the transition to clean, efficient and quiet aviation has been a long time coming. Climate change and the abundance of CO₂ in the atmosphere really made him think hard about developing a new drive concept for planes—so why not come up with a whole new construction while you’re at it?

More than just an idea.

The Swiss Air Lines captain followed through with his idea. Stuber looked around for suppliers and development partners and started building a team of experts and enthusiasts for eco-friendly flying. The nucleus of new aviation technology is a regular, inconspicuous terraced house in Grenchen. Three larger rooms and an office—that’s the premises of Smartflyer AG. Rolf Stuber founded the company in 2016 and has since been joined by 13 experts from various backgrounds.

“Not too long ago, we got to witness something very special in the yard” says Rolf Stuber. “We saw what our powertrain was really capable of.” This was the first huge step towards developing a four-seater high wing airplane with a hybrid drive, due for its maiden flight in 2023. The CEO leads us through the workshop to something that looks remarkable. Currently it doesn’t look much like an airplane—but do car engines look like cars at this stage of development? The hybrid airplane’s centrepiece has been assembled from a combustion engine, a Rotax 914, which is very popular in aviation. It also contains a YASA generator and inverter that changes AC to DC for the 3,000 or more battery cells, which are wrapped up in packs of five, equalling a total of 600 packets in the battery box. And last but not least there is the RRP260D Rolls-Royce electric motor that the smartflyer team is testing with the manufacturer in a collaborative project.

After building a four-seater, we really want to build a hybrid plane for 8 to 10 passengers.

A dream team: Combustion engine and electric motor. The combustion engine will be located inside the nose cone of the plane and provide energy for flying when cruising. The batteries—which are stored in the wings—provide energy for starting and landing, which incidentally are an extremely quiet affair thanks to the electric motor that powers the propellor. Rolf Stuber really comes to life as he tells us about the challenge that control engineering posed when developing the drive and the amount of fine adjustment it took to interlink the combustion engine and the generator to provide maximum efficiency while minimising CO₂ emissions.

“Engineering this power train was the first successful step towards beginning a new era in aviation with the smartflyer” says the company’s founder. The next milestone would be to find the perfect shape and truing for the airframe. We are shown the plane on a photo-realistic 3D-rendered image. Nose cone—wings—propellor. Hold on a sec, why did they put that there?

Rolf Stuber hears this question all the time. Planes that have the propellor attached to the vertical stabiliser at the rear are not something you see every day. Rolf Stuber admits that he was shocked too when he first saw this on an electric airplane 10 years ago at the AERO convention in Friedrichshafen. But now he knows: “This is the ideal spot. Due to the increased ground clearance, we can use a larger propellor that provides a greater efficiency and also receives a laminar flow so that nothing impedes thrust.

SMARTFLYER is a hybrid-electric aircraft that seats four passengers. The smartflyer operates purely electric during starts and landings. The Rolls-Royce electric motor on top of the vertical stabiliser is very efficient and quiet. A range extender charges the batteries during cruise and provides a range of more than 800 kilometres. Smartflyer’s maiden flight is scheduled for 2023.

Engineering this power train was the first successful step
towards beginning a new era in aviation with the smartflyer.

Specialists with a love for flying.

The smartflyer team had perfected its means of digital collaboration long before the corona pandemic. The group of aerodynamicists, electric technicians, software developers and structural engineers that shares a passion for eco-friendly flying has members spread out across Switzerland. They all have day jobs besides developing the aircraft. They work as lecturers at universities, are pilots, have their own engineering offices or are students. The structural calculations are being handled by an engineering office in the Czech Republic. The combination of old and young, experienced and inspired, is what makes this team of flight enthusiasts strong.

“There’s to-do-list for everyone once a week and we meet up every three months, whenever it’s possible” says Gildas Höllmüller. The construction designer works from one the desks in Grenchen, whenever he’s in town. He uses SOLIDWORKS for his work. Learning the 3D CAD software was easy for him. “It was all learning by doing”, he recalls. The program’s multifunctionality really impressed him. Being able to model anything from simple parts to complex assemblies in a 100% parameter-aware environment is essential for users in aircraft construction, as Gildas Höllmüller explains.  He was able to find answers to all of his questions using videos provided by DPS Software, a CAD partner situated in Stuttgart that belongs to the Bechtle Group. The collaboration with DPS’ Swiss branch and the service hotline also helped a lot in solving problems without ending up with a headache.

Tuberk Sezen, sales manager at DPS Software in Switzerland isn’t surprised that their software is so well-received: “SOLIDWORKS by Dassault Systèmes is ideal for aircraft construction, where it’s necessary to combine complex shapes.” Aerodynamicist Hans Kandlbauer already knows how critical the SOLIDWORKS flow simulation will be once the team moves onto the next stage in construction, which will be to find the perfect shape for the airframe: “Thanks to automatic rectangular meshing this simulation tool allows us to quickly modify objects, efficiently play through ‘what if’ scenarios and at the same time achieve a great level of precision.” It truly is a multifunctional and powerful tool that is available at a fair market price, concludes CEO Rolf Stube. Of course, money is a critical issue for the young company with its high flying plans. Luckily, they qualify for state funds from the Federal Office of Civil Aviation FOCA. But still, building a plane is an expensive venture.

Work never ends for the smartflyer team, even when their plane takes off for its maiden voyage in 2023. “The show must go on” says Rolf Stuber and tells us: “After the four-seater, we will work to send a hybrid plane for eight to ten passengers up in the air.”

SOLIDWORKS by Dassault Systèmes is ideal for aircraft construction, where it’s necessary to combine complex shapes. 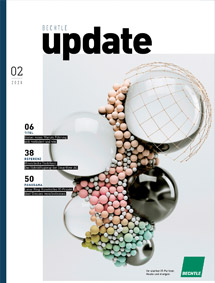 This is an excerpt of an article in the print edition of Bechtle update 02/2020.