Bechtle remains on course after Q2.

Neckarsulm, 13. August 2013 – In the second quarter of 2013, Bechtle AG generated revenues of €518.5 million, an increase of 4.7 per cent. From April to June, the growth was driven by the domestic system houses, which contributed to the revenue with an above-average increase of 8.9 per cent. Though earnings before interest and taxes (EBIT) underwent a slight decrease of 2.5 per cent to €15.0 million, the year-on-year gap compared to the first quarter was greatly reduced. This positive development was mainly supported by the IT system house & managed services segment, which managed to improve its EBIT by 16.2 per cent to €7.7 million.

“We are headed in the right direction! In the second quarter, we were able to further expand our market share, and our earnings are close to those of the prior year. Especially the performance of our domestic system houses is very encouraging, giving us reason to be optimistic with respect to the remaining part of the year,” explains Dr. Thomas Olemotz, Chairman of the Executive Board of Bechtle AG.

IT E-Commerce with Low Growth.

As of 30 June, cash and cash equivalents including time deposits and securities amounted to a comfortable €114.3 million. Thus, Bechtle is free of debt, as the total liquidity exceeds the total financial liabilities by €45.0 million. As of the balance sheet date, the equity totalled €458.1 million, a level close to that of 31 December. The equity ratio improved from 54.4 per cent to 57.2 per cent.

As of the reporting date 30 June 2013, the Bechtle Group had a total of 6,053 employees, including 391 trainees. Compared to 31 December 2012, this means an increase of 83. The increase was partly caused by the takeover of about 60 managed services employees from IBM. Year on year, the increase is significantly higher, with 303 employees more than in the prior year (30 June 2012: 5,750 employees). The domestic system houses accounted for most of the 5.3-per-cent increase over the prior year. Bechtle continues to place great emphasis on corporate training. At 7.6 per cent as of 30 June 2013, the training ratio in Germany again reached a high level.

As previously, Bechtle expects the revenues in 2013 to outperform the market. The company also holds fast to the goal of increasing the earnings compared to the prior year. “We are satisfied with the trend that emerged in the second quarter. For the remaining six months, we expect higher growth dynamics, increasing capacity utilisation of our employees and thus a further improvement of the earnings position,” says Dr. Thomas Olemotz. 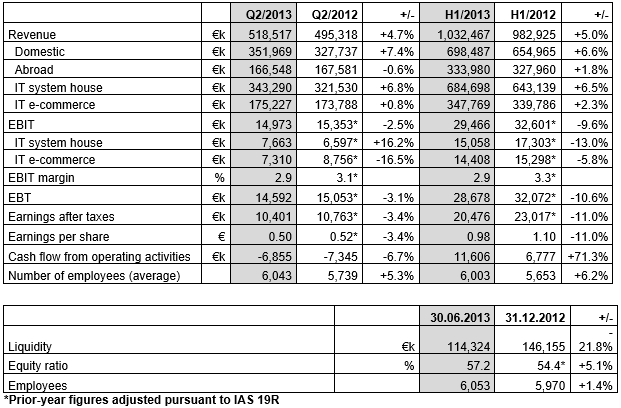