Neckarsulm, 14 May 2014 – In the first quarter of 2014, Bechtle AG generated revenues of €586.7 million, an increase of 14.2 per cent. The growth drivers were the e-commerce companies, which gained 16.1 per cent, and the domestic system houses, which went up 14.6 per cent. Earnings before interest and taxes (EBIT) increased 46.0 per cent to €21.2 million. The excellent earnings performance was mainly supported by the IT system house & managed services segment, which was able to boost its EBIT by almost 85 per cent to €13.7 million. As of 31 March 2014, Bechtle had a total of 6,352 employees, 393 more than in the corresponding prior-year quarter.

“Bechtle had an auspicious start into the year. Thus, our optimism at the beginning of the year has been confirmed. The current economic framework conditions indicate a strong fiscal year 2014,” explains Dr. Thomas Olemotz, Chairman of the Executive Board of Bechtle AG.

As of 31 March, cash and cash equivalents including time deposits and securities amounted to a comfortable €152.0 million. Thus, Bechtle can pre-finance large projects and grow by means of acquisitions without any difficulties. As of the balance sheet date, the equity amounted to €516.4 million. The equity ratio improved from 55.1 per cent to 57.3 per cent. The extrapolated return on equity reached an excellent value of 12.7 per cent.

As of the reporting date 31 March 2014, the Bechtle Group had a total of 6,352 employees, including 434 trainees. This represents a year-on-year increase of 393. The increase of 6.6 per cent is the result of new recruitment as well as acquisitions. In the future, Bechtle will continue to invest in the training of its staff members. As of 31 March 2014, the training ratio in Germany was 8.2 per cent.

From the current perspective, Bechtle is confident that its revenue and earnings position will outperform the prior year in the further course of the year as well. However, in view of the excellent performance in the second half of 2013, the Executive Board expects the growth dynamics to slacken slightly compared to the prior year starting from the third quarter. “In 2014, we want to increase both the revenue and the earnings considerably compared to the prior year. The impressive dynamics and outstanding team performance in the first quarter mean that we are confident that we will indeed achieve these targets,” says Dr. Thomas Olemotz.

Bechtle KPIs for the First Quarter of 2014. 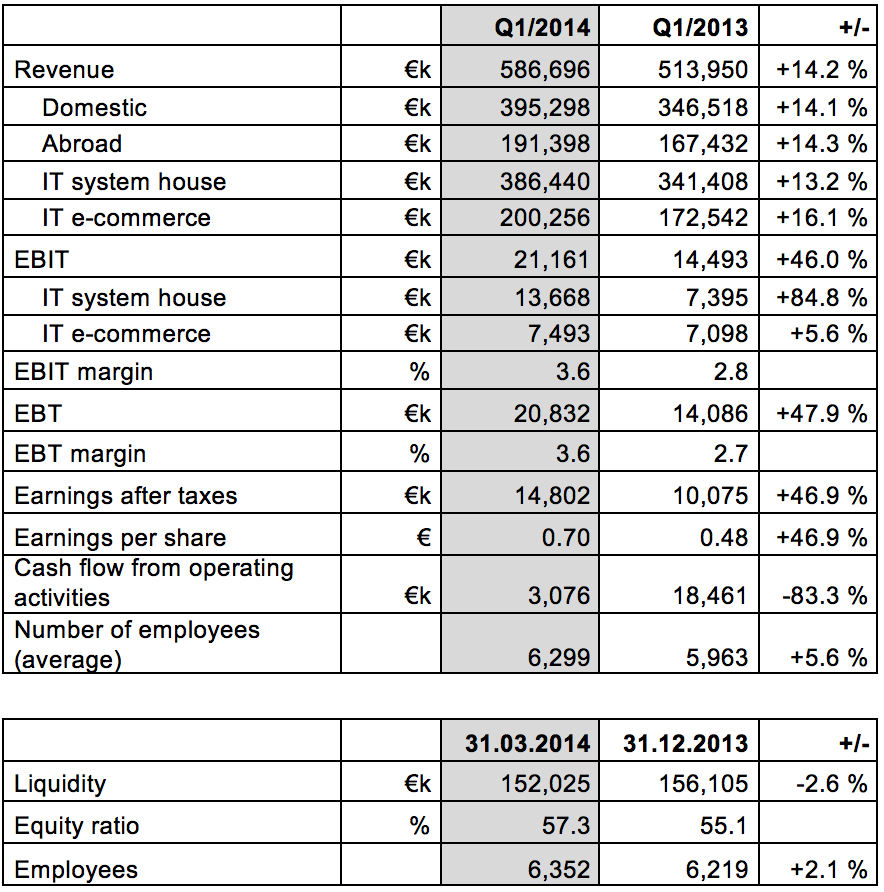