"After the excellent fiscal years of 2010 and 2011, we are pleased with the YTD revenue development in 2012. Especially in Germany, we have again strengthened our competitive position with an above-average growth of 10 per cent," explains Dr. Thomas Olemotz, Chairman of the Executive Board of Bechtle AG.

In the period from January to September, the revenue in the IT system house & managed services segment amounted to €979.1 million, a growth of 5.9 per cent, mainly due to the good market position and the stable demand in Germany. On the home market, revenues increased 10.8 per cent. In contrast, the system house business in other countries dropped 18.3 per cent. Here, the curbed economic development caused noticeable reluctance to buy and further postponement of projects. Organically, the segment revenue amounted to €955.6 million, 3.4 per cent more than in the prior year. EBIT dropped from €34.7 million in the prior year to €27.7 in the period under review. This was mainly due to the higher personnel expenses, which could not be compensated despite the higher gross earnings. Due to acquisitions, depreciation and amortisation also went up. The EBIT margin amounted to 2.8 per cent, compared to 3.8 per cent in the prior year.

IT e-commerce resilient to difficult environment.

The IT e-commerce segment underwent exclusively organic growth of 4.0 per cent to €505.4 million. In this segment, too, Bechtle benefited from the stable demand in Germany and was able to increase its revenue 5.7 per cent. In other countries, the demand was impaired especially by the euro crisis. Nevertheless, Bechtle achieved a growth of 3.2 per cent. In the nine-month period, EBIT amounted to €23.8 million, 4.3 per cent less than in the prior year. The EBIT margin declined from 5.1 per cent to 4.7 per cent.

As of 30 September, cash and cash equivalents, including time deposits and securities, totalled a comfortable €101.3 million. Thus, the total liquidity exceeded the total financial liabilities by €37.5 million. As of the balance sheet date, the equity increased €16.2 million to €435.2 million. The equity ratio improved from 52.2 per cent to 58.0 per cent.

As of 30 September, the group had 5,978 employees. The growth in the third quarter thus amounted to 228. This figure includes 136 employees who embarked on their professional career with Bechtle on 1 September. Currently, the training ratio in Germany is 7.3 per cent. Year on year, the average number of employees in the group went up 680, an increase of 13.5 per cent. This increase resulted from new recruitment to help improve our position in strategically important focus areas as well as acquisitions. "Ensuring our company's sustainability by gaining and bonding qualified experts is currently one of our top priorities," explains Dr. Thomas Olemotz.

As previously, Bechtle expects this year's revenue increase to outperform the market. Thus, the company will further expand its market share. However, in view of the development of the first nine months, Bechtle's earnings before taxes will not reach the record mark of the prior year. "The lower income growth compared to the prior year is the result of the weak performance in the European markets outside Germany and the major investments in new employees," says Dr. Thomas Olemotz. 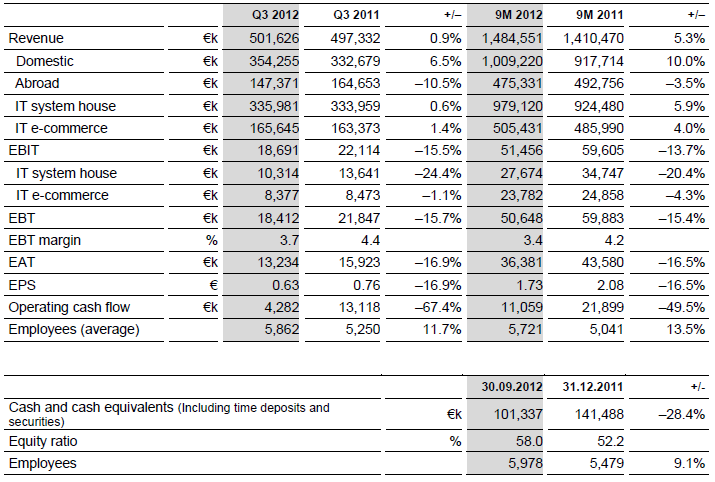