"Considering the economic framework conditions on our markets and the significant increase in the number of employees, we are satisfied with our business performance in the first half of the year. Though we felt the impact of the euro crisis in some European countries, we stepped up our growth considerably in the second quarter. We were also able to strengthen our competitive position in the domestic market, which is an important market for us," says Dr. Thomas Olemotz, Chairman of the Executive Board of Bechtle AG.

In the first six months, the IT system house & managed services segment generated revenues of €643.1 million, a growth of €52.6 million or 8.9 per cent. This development was mainly driven by the home market Germany, where the customer demand and willingness to invest remained stable and resulted in a revenue increase of 13.1 per cent. Organically, the segment revenue amounted to €622.3 million, 5.4 per cent more than in the prior year. EBIT dropped from €21.1 million in the prior year to €17.4 in the period under review. This development was mainly caused by the higher personnel expenses, which could only be partly compensated by the higher gross earnings. Due to acquisitions, depreciation and amortisation also went up. The EBIT margin amounted to 2.7 per cent, compared to 3.6 per cent in the prior year.

The IT e-commerce segment increased its exclusively organic revenues by 5.3 per cent to €339.8 million. Of this amount, Bechtle generated €239.1 million abroad, a growth of 5.1 per cent. In the six-month period, the EBIT amounted to €15.4 million, 6.0 per cent less than in the prior year. The reason for this development was the great price pressure in the trading-only business, along with increased personnel expenses. The EBIT margin declined from 5.1 per cent to 4.5 per cent.

Due predominantly to the dividend payout and investments in the working capital, cash and cash equivalents including time deposits and securities decreased 23.7 per cent to €108.0 million. As of 30 June 2012, the equity increased €3.0 million to €422.0 million. The equity ratio improved from 52.2 per cent to 55.5 per cent.

Growth in number of employees as investment in the future.

As of the end of the quarter, the group had 5,750 employees. Thus, the number of employees increased 166 in the quarter under review, after 105 in the first quarter. Year on year, the average number of employees in the group went up 716, an increase of 14.5 per cent. This increase was caused by new recruitment as well as the takeover of KUMAtronik GmbH at the beginning of the second quarter.Investments made in Bechtle's expanding range of expertise, in particular, contributed to the increase in personnel costs.

Provided that the euro crisis does not intensify and cause major economic dislocations, the Executive Board looks to the second half of the year with confidence. "For the year as a whole, we are still targeting a revenue increase that is higher than the market average. Taking the developments of the first six months into consideration, the goal of holding or exceeding the prior-year earnings level appears to be rather ambitious. Nevertheless, in view of the two strong quarters expected in the annual comparison in the second half of the year, we will be able to reach this goal," explains Dr Thomas Olemotz. 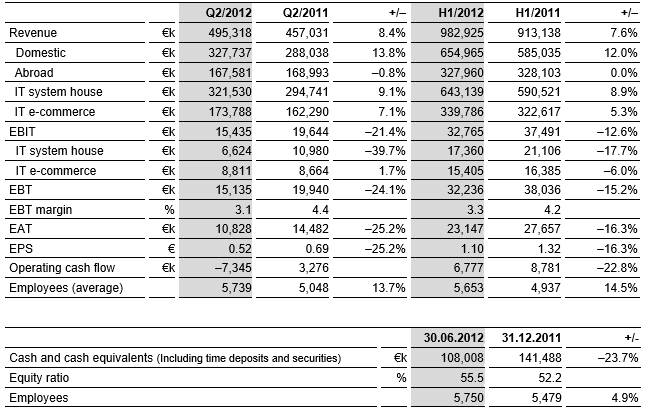