Bechtle reports yet another successful year.

Neckarsulm, 16 March 2016 – Bechtle AG has once again proven its prowess with an impressive 2015 fiscal year. The Group’s above-average growth resulted in additional market share and solidified its position as Germany’s leading B2B IT service provider. Revenue climbed almost 10 percent to €2,831.3 million in the reporting period. Earnings before taxes (EBT) surged by more than 20 percent to €129.4 million, leading to an outstanding EBT margin of 4.6 percent. The dividend is expected to increase for the sixth year in a row, from €1.20 to €1.40.

Growth during the 2015 fiscal year was predominantly organic, stemming in almost equal proportions from both of the Group’s segments, IT System House & Managed Services and IT E-Commerce. “This balanced growth is proof that we have followed the right approach. We’ve reinforced our e-commerce segment by investing in our workforce and by continuing to expand the Global IT Alliance. At the same time, we’ve effectively positioned our system houses as a solutions-focused partner for IT projects involving digitisation, cloud computing, mobility, IT security and sourcing,” explains Dr Thomas Olemotz, Chairman of the Executive Board of Bechtle AG.

Partner for future-ready IT architecture.

Revenue for the IT System House & Managed Services segment climbed 9.4 percent from €1,727.1 million to €1,889.5 million. Bechtle continued to increase the services portion of this segment by leveraging its extensive managed-services expertise and expanding its solutions business in all aspects of IT architecture transformation. EBIT advanced by a strong 16.5 percent to €80.3 million, compared with €68.9 million the previous year. EBIT margin rose from 4.0 percent to 4.2 percent.

IT E-Commerce revenue growth hit double digits in 2015 as the segment increased sales by 10.4 percent from €853.4 million to €941.8 million. Growth was especially robust in the Group’s non-German subsidiaries, which gained 12.4 percent to €687.7 million versus €611.7 million in the previous year. Contributing to this success were the employees hired at the end of 2014, as well as the Group’s global reach, driven by the Global IT Alliance. Streamlined processes and outstanding efficiency, particularly in its logistics operations, have made Bechtle’s e-commerce segment a profitable stalwart. EBIT swelled 24.2 percent to €49.2 million in the reporting year, up from €39.6 million previously. At 5.2 percent (prior year: 4.6 percent), the EBIT margin has already reached the Group’s target for 2020.

Investments in the future.

At 31 December 2015, Bechtle employed 7,205 staff, representing a total workforce increase of 633 employees, or 9.6 percent, from the 6,572 reported in the previous year. New hires made up the majority of this growth. After focusing its 2014 personnel investments on IT E-Commerce, the bulk of new hires in 2015 were in the IT System House & Managed Services segment, which added 602 employees. Vocational training remains a cornerstone of Bechtle’s HR policy and a vital investment in the Group’s future. At 31 December 2015, the Group had a total of 473 vocational trainees. Although the trainee ratio in Germany as a whole declined as the result of vigorous workforce growth, it still comes in at a solid 7.5 percent. By contrast, the trainee ratio at the Group’s main office in Neckarsulm grew, reaching just shy of 10 percent.

Bechtle’s outlook for 2016 is bright. The Chairman is confident that Bechtle will maintain its current success, citing the Group’s excellent competitive standing as well as the optimistic economic forecasts for Germany and the EU. Revenue and earnings are expected to continue their notable upward trajectory. “We are confident that 2016 will yet again bring above-average growth in profitability and an even stronger competitive standing. Bechtle is better prepared than ever to provide customers with expert support for any and all cutting-edge IT trends,” affirms Dr Olemotz. 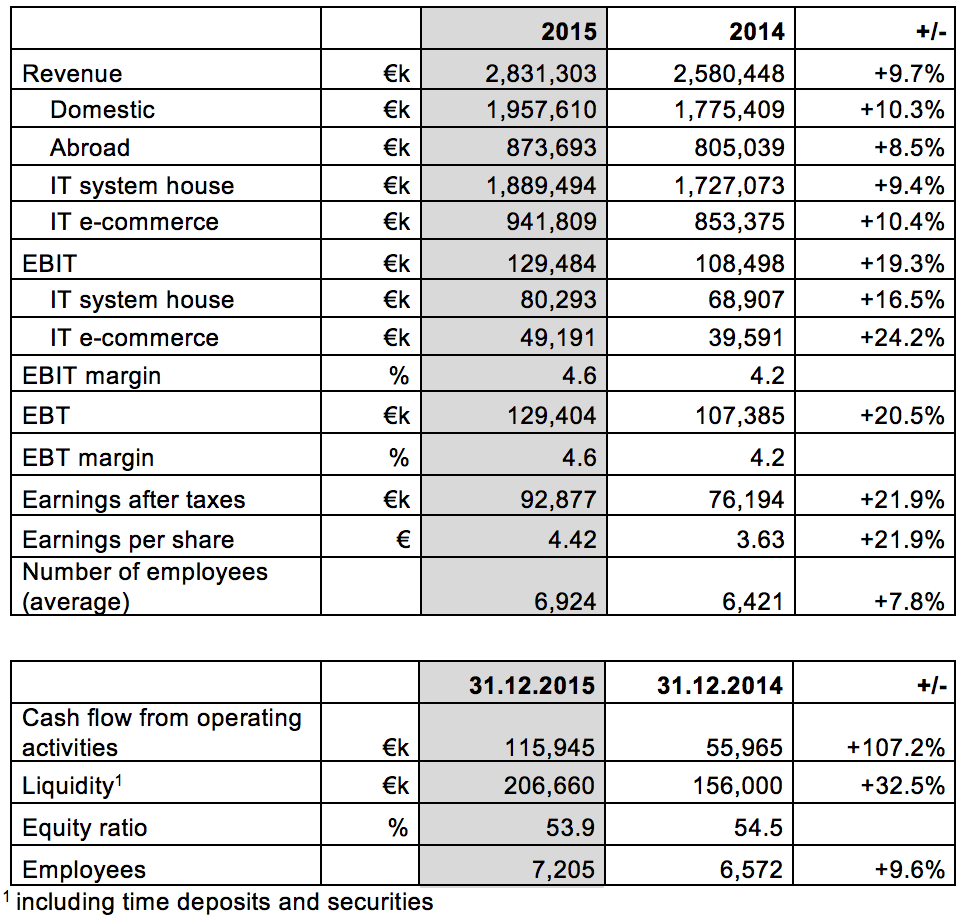