“For Bechtle, the fiscal year 2013 was extremely successful. We generated record figures, reaching the goals we had set: In terms of the revenue and earnings, we outperformed the market and greatly surpassed our prior-year figures. At the same time, we invested in the training of our employees, thereby laying the foundation for further profitable growth,” explains Dr. Thomas Olemotz, Chairman of the Executive Board of Bechtle AG.

In the IT system house & managed services segment, the group generated revenues of €1,535.3 million in 2013 (prior year: €1,394.5 million). This represents an increase of 10.1 per cent. The segment benefited from the high domestic demand, the good competitive position, the headcount increase and the extensive qualification measures. With a revenue growth of 11.0 per cent, the domestic system house companies significantly expanded their market share. In the system house segment, EBIT went up 26.8 per cent to €56.2 million (prior year: €44.3 million). Accordingly, the EBIT margin improved from 3.2 per cent to 3.7 per cent.

In 2013, the revenue in the IT e-commerce segment increased 5.1 per cent to €738.2 million (prior year: €702.4 million). The revenue increase was mainly possible due to the good performance on the overseas markets. Here, the revenue amounted to €522.0 million, a year-on-year increase of 6.9 per cent (prior year: €488.5 million). In the reporting period, operating income amounted to €34.9 million, 3.0 per cent below the prior-year figure of €35.9 million. The EBIT margin was 4.7 per cent, compared to 5.1 per cent in the prior year, a level that is exceptionally good for the industry. The slight decline was caused by the high price and cost pressure as well as the product mix, which adversely affected the margin in the year under review.

The balance sheet of the Bechtle Group reveals a sound assets position and financial structure. Cash and cash equivalents including time deposits and securities increased 6.8 per cent from €146.2 million to €156.1 million. Bechtle’s net debt was minus €91.9 million. Thus, Bechtle is effectively debt-free. In the reporting period, the equity increased 9.1 per cent from €459.6 million to €501.6 million. The equity ratio went up from 54.5 per cent to 55.1 per cent. The return on equity improved from 13.7 per cent in the prior year to 14.2 per cent in the year under review. The cash flow from operating activities and the free cash flow also picked up significantly in the reporting period.

As of 31 December 2013, the Bechtle Group had a total of 6,219 employees. Compared to the prior year (5,970 employees), the headcount went up by 249 (plus 4.2 per cent). The increase was the result of acquisitions as well as new recruitment, and the percentages were evenly distributed over the segments and regions. As of the end of the year, Bechtle had 4,743 employees in Germany. All in all, this means 193 people more than in the prior year (4,550 employees). The number of employees in other countries increased from 1,420 to 1,476. Bechtle continues to invest intensively in training. As of the end of the year, the group had a total of 473 young trainees. This represents a 10.5-per-cent increase over 2012. The training ratio in Germany amounted to an excellent 9.2 per cent.

In view of the sound economic situation and the group’s strength, the Executive Board currently expects the business performance of Bechtle AG in this year to be positive and again above industry average. The revenue and earnings of Bechtle AG in the first weeks of 2014 confirm the optimistic outlook. “This year, Bechtle will again do everything necessary to continue on its road to success. Our goal for 2014 is to achieve further revenue and earnings growth and to gain market shares. As in the past, we want to make progress both organically and through acquisitions,” says Dr. Thomas Olemotz. 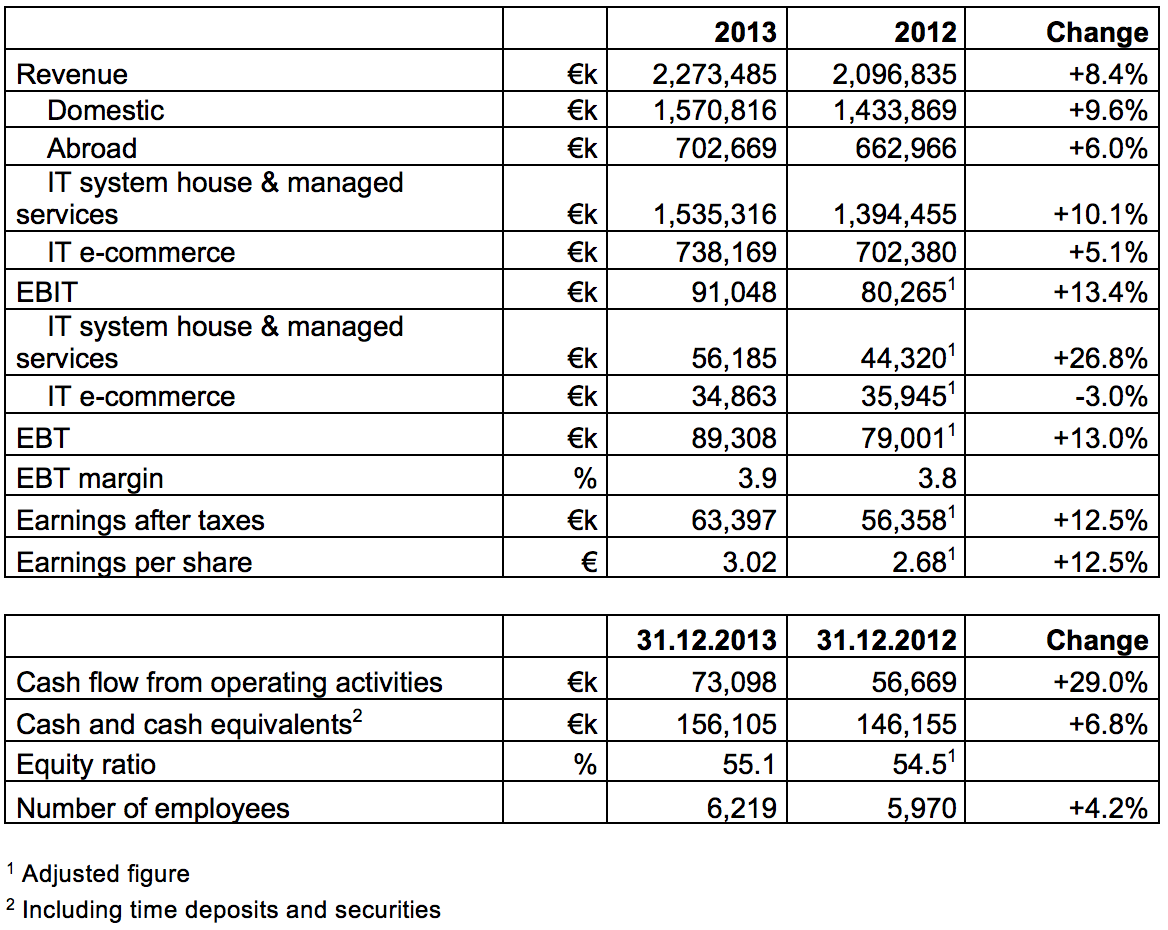