“We are very pleased with the performance in the third quarter. In Germany and abroad, both business segments contributed to the group’s growth, supporting our positive outlook for the year as a whole”, says Dr. Thomas Olemotz, Chairman of the Executive Board of Bechtle AG.

Above-average growth in earnings from services.

The IT system house & managed services segment increased its revenue 6.0 per cent to €495.5 million. The growth was widely backed by stable customer demand for conventional system house services as well as for services related to modern IT architectures, such as application solutions as well as managed and cloud services. In the third quarter of 2016, segment EBIT surged by an above-average 14.6 per cent to €23.3 million. The EBIT margin was 4.7 per cent (prior year: 4.3 per cent).

In the reporting period, the revenue in the IT e-commerce segment climbed 7.3 per cent to €234.5 million. The increase of the domestic companies was especially high. These companies boosted their revenues by 8.1 per cent to €69.7 million. The other 13 European countries went up 6.9 per cent to €164.8 million. However, EBIT declined by €1.0 million. This was due to the higher cost base in view of the future growth. Nevertheless, the margin amounted to an excellent 5.1 per cent.

As of the reporting date 30 September 2016, the Bechtle Group had a total of 7,645 employees, including 516 trainees. Compared to 30 September 2015, the headcount thus went up by 491, an increase of 6.9 per cent. The increase was the result of acquisitions as well as new recruitment. On 1 September, more than 160 young people embarked on their training or integrated degree programme with Bechtle. The training ratio in Germany was 7.8 per cent.

In view of the good performance of the first nine months of 2016, Bechtle is confident that it will be able to reach the goal formulated in March 2016, which provides for a significant revenue and earnings increase for the year as a whole. However, the Executive Board has decided to step up to the original forecast, which had predicted an EBT margin at the prior-year level. In the course of the year, Bechtle has continually succeeded in noticeably increasing the margin, especially in the IT system house & managed services segment. Moreover, a large-scale forfaiting in the third quarter resulted in a positive one-time effect of €1.3 million on the financial earnings. Against this backdrop, the Executive Board expects a slight increase of the EBT margin for 2016 as a whole. “The earnings development in the year to date has exceeded our expectations. In view of the fact that we have significantly outperformed the prior year especially in the IT system house & managed services segment, we feel that a slight EBT margin increase would also be realistic at the group level. However, this will only be possible if the economic framework conditions remain intact in the fourth quarter and we do not experience any supply bottlenecks on the supplier side towards the end of the year”, says Dr. Thomas Olemotz.

Bechtle KPIs for the Third Quarter. 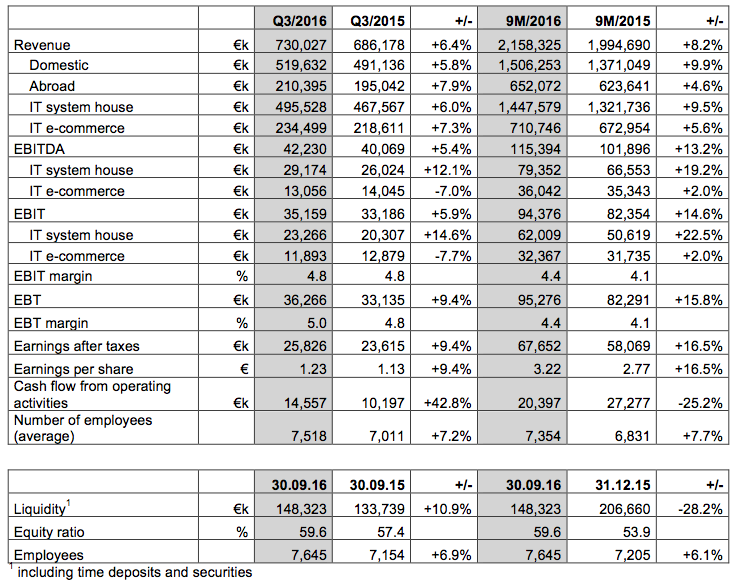