“Bechtle continued to exhibit above-average growth dynamics. Although the prior year had already been excellent, our largely organic growth was in the two-digit range, thereby by far outperforming the overall market,” explains Dr. Thomas Olemotz, Chairman of the Executive Board of Bechtle AG.

The IT system house & managed services segment stepped up its revenue 11.2 per cent to €467.6 million (prior year: €420.6 million). As in the prior quarters, the domestic system houses were the growth drivers, surging 13.4 per cent to €426.7 million. The increase was driven by a broad demand on the part of industry customers. In the third quarter of 2015, segment operating income increased to €20.3 million (prior year: €19.6 million). The EBIT margin was 4.3 per cent (prior year: 4.6 per cent).

In the reporting period, the revenue in the IT e-commerce segment climbed 10.6 per cent to €218.6 million. The increase of the foreign e-commerce companies was especially high. They boosted their revenues by 14.2 per cent to €154.2 million. The German companies recorded growth from €62.8 million to €64.5 million. Year on year, EBIT climbed to €12.9 million, 22.8 per cent more than in the prior year. The margin increased from 5.3 per cent to an outstanding 5.9 per cent.

As of 30 September, cash and cash equivalents including time deposits and securities amounted to a comfortable €133.7 million. The liquidity was thus higher than the total financial liabilities, i.e. Bechtle is free of debt and capable of financing future growth under its own steam whenever necessary. The equity ratio improved from 54.5 per cent to 57.4 per cent. The return on equity amounted to 10.7 per cent (prior year: 10.6 per cent). The extrapolated return on equity amounted to 14.6 per cent, also slightly above the figure of the prior year (14.5 per cent). The cash flow from operating activities reached €27.3 million within the nine-month period, compared to €11.6 million in the prior-year period.

Number of Employees on the Rise.

As of the reporting date 30 September 2015, the Bechtle Group had a total of 7,154 employees, including 493 trainees. This represents a year-on-year increase of 620 employees, i.e. 9.5 per cent. The increase was caused by the acquisition of Modus Consult (180 employees) as well as new recruitment. On 1 September, 140 young people embarked on their training or integrated degree programme with Bechtle. The training ratio in Germany thus amounted to 8.0 per cent.

Bechtle anticipates that in 2015 as a whole, its revenue and earnings will significantly outperform the prior year. “The unexpectedly strong third quarter reinforces our confidence for the year as a whole. We expect growth in the high single-digit to low two-digit range, both for the revenue and for the earnings,” says Dr. Thomas Olemotz.

Bechtle KPIs for the Third Quarter and Nine-Month Period of 2015. 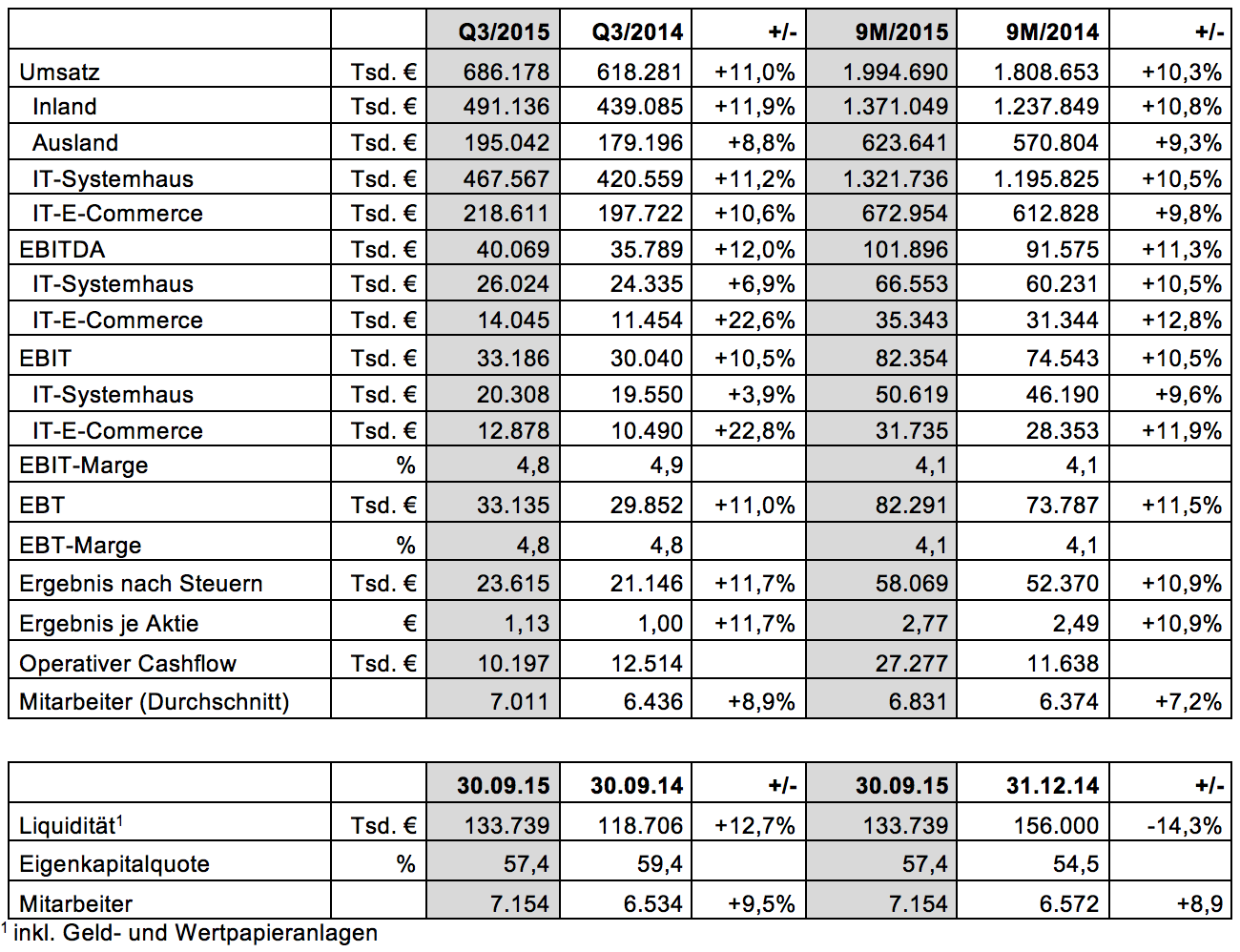