Neckarsulm, 14 November 2013 – In the third quarter of 2013, Bechtle AG generated revenues of €558.8 million, an increase of 11.4 per cent. From July to September, the growth was again driven by the domestic system houses, which contributed to the revenue growth with an above-average increase of 16.7 per cent. Earnings before taxes (EBIT) increased 35.3 per cent to €25.2 million. In this field too, the development was mainly supported by the IT system house & managed services segment, which was able to boost its EBIT by an outstanding 65.5 per cent to €17.0 million. The cumulative EBIT as of 30 September amounted to €54.6 million, 6.7 per cent more than in the prior year.

“The excellent performance of Bechtle in the third quarter confirms our strategy of combining trade and project business with high-quality services. In this way, we have further improved our market and competitive position. We are also increasingly seeing the benefits of the investments in our team. All in all, the preconditions for a strong final quarter are good,” says Dr. Thomas Olemotz, Chairman of the Executive Board.

In the third quarter, the IT system house & managed services segment made an above-average contribution to the company’s growth. At €385.0 million, revenues were 14.6 per cent higher than in the corresponding prior-year quarter (€336.0 million). The domestic system houses served as the growth driver, stepping up their contribution to the group revenue by 16.7 per cent to €348.2 million (prior year: €298.4 million). In the third quarter of 2013, the segment EBIT increased 65.5 per cent to €17.0 million (prior year: €10.3 million). At 4.4 per cent, the EBIT margin was significantly higher than in the prior year (3.1 per cent). This development was mainly driven by the increased share of high-quality services.

As of 30 September, cash and cash equivalents including time deposits and securities amounted to a comfortable €119.9 million. Thus, Bechtle is free of debt, as the total liquidity exceeds the total financial liabilities by €47.0 million. As of the balance sheet date, the equity totalled €475.2 million, 3.4 per cent more than on 31 December. The equity ratio improved from 54.4 per cent to 57.8 per cent.

From the current perspective, Bechtle is confident that its revenue and earnings position will outperform the prior year in the fourth quarter as well. However, as the fourth quarter of 2012 was already very successful, it is unlikely that we will be able to record growth rates as high as those of the third quarter. Backed by the good reporting quarter, the Executive Board believes that the fiscal year 2013 will see a clear ‒ though single-digit ‒ increase in revenue and a noticeable earnings growth. “Thus, we will again grow faster than the market and profitably in our anniversary year 2013 as well. With our business model, an efficient portfolio and highly motivated team members, our positioning for the future is excellent,” says Dr. Thomas Olemotz. 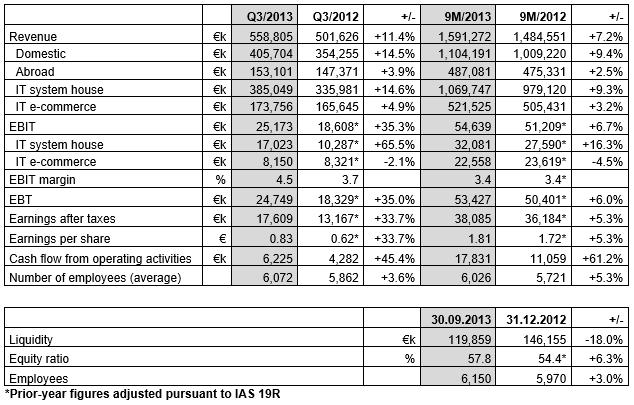