The growth was largely organic and broadly supported by all regions and segments. The companies abroad recorded revenue growth of 14.7 per cent, exceeding the €1 billion mark for the first time. In all quarters, the consolidated growth rates remained in the two-digit range, becoming increasingly dynamic in the course of the year. In the first half of the year, the revenue growth amounted to 13.8 per cent. An outstanding growth of 19.7 per cent was reached in the third quarter, and the final quarter also achieved a two-digit growth rate of 14.5 per cent despite the strong base effect of the prior year.

Investing in the Future.

“In 2017, we again invested in numerous future-oriented projects that are important for our company. This includes the relocation of our data centre to Frankfurt, the establishment of the Bechtle Clouds and the launch of the central digital platform bechtle.com. Taking these investments into consideration, the significant revenue and earnings growth is a remarkable achievement on the part of our employees”, says Dr. Thomas Olemotz, Chairman of the Executive Board of Bechtle AG.

In 2017, the IT system house & managed services segment boosted its revenue by 15.7 per cent to €2,516.9 million. The wide spectrum of services – e.g. in the fields of hybrid cloud and multi-cloud concepts, modern workplace and data centre architectures, networking, security and application solutions – fuelled a noticeable demand impulse. Thus, EBIT grew by a disproportionately high rate of 18.5 per cent to €114.5 million. The EBIT margin improved from 4.4 per cent to 4.5 per cent.

In 2017, the IT e-commerce segment underwent purely organic growth of 14.6 per cent to €1,053.3 million. With an increase of 19.2 per cent to €307.5 million, the growth was especially strong in Germany. However, the companies abroad also underwent two-digit growth of 12.9 per cent. Mobile devices, monitors and servers experienced the highest demand. EBIT rose 4.8 per cent to €49.8 million (prior year: €47.5 million). The slight margin drop was caused by a positive one-off effect of about €2 million in the previous year.

The Executive Board is optimistic about the year 2018. The revenue and earnings are again expected to undergo significant growth. “Once again, Bechtle is well prepared to reach its ambitious goals in the current fiscal year, which is derived from the Vision 2020. Our business success is based on our customers’ willingness to invest in modern IT architectures that represent a key precondition for exploiting the opportunities that arise from the digitisation trend”, explains Dr. Thomas Olemotz. 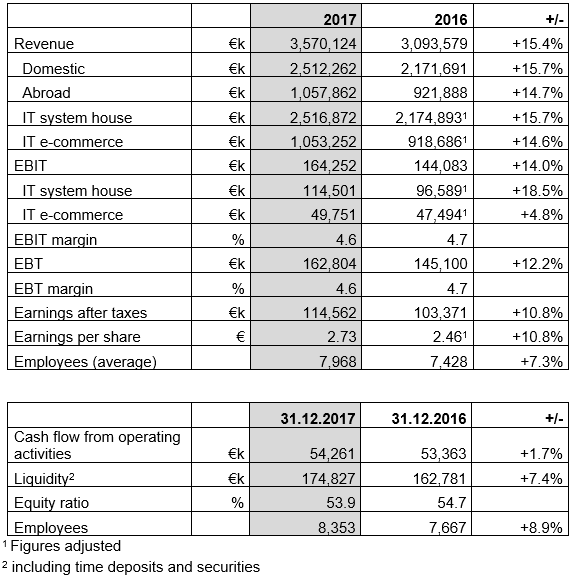