Neckarsulm, 16 March 2017 – In the fiscal year 2016, Bechtle AG again recorded highly dynamic growth. The revenue increased 9.3 per cent to €3,093.6 million, exceeding the three-billion-euro mark for the first time. The growth rate was particularly noteworthy in the fourth quarter: Despite the high reference level of the excellent prior-year quarter, Bechtle achieved a revenue growth of 11.8 per cent towards the end of the year. In the year as a whole, earnings before taxes (EBT) surged by more than 12 per cent to €145.1 million. The EBT margin thus amounted to an excellent 4.7 per cent. As of the end of the year, Bechtle had 7,667 employees, 6.4 per cent more than in the prior year. The dividend is to be stepped up for the seventh year in a row, increasing to €1.50 (prior year: €1.40).

“In 2016, Bechtle again grew at a much higher rate than the market as a whole. This is an impressive achievement of our team. In all customer segments, we have successfully positioned ourselves as a solution-oriented, reliable partner for IT projects related to hot topics such as digitisation, cloud, mobility, IT security and sourcing”, explains Dr. Thomas Olemotz, Chairman of the Executive Board of Bechtle AG.

Advanced Solution Expertise Drives the Service Business.
In 2016, the IT system house & managed services segment again stood out as the growth driver. The revenue reached €2,089.7 million, surpassing the two-billion-euro mark for the first time. The growth amounted to 10.6 per cent. In this business segment, the comprehensive service offer of the Bechtle system houses delivered a noticeable demand impulse. Owing to the higher service share, EBIT grew at a disproportionately high rate of 16.4 per cent to €93.5 million. The EBIT margin went up from 4.2 per cent to 4.5 per cent.

E-Commerce Cracks One-Billion-Euro Mark.
In 2016, the IT e-commerce segment grew 6.6 per cent to €1,003.8 million. With an increase of 8.4 per cent to €275.5 million, the growth in Germany was especially strong. The online-based trading segment also demonstrated a remarkable year-end rally. In the fourth quarter, the revenue climbed 9.0 per cent. In Germany, it even increased 14.7 per cent. In 2016, EBIT grew €1.4 million to €50.6 million, an increase of 2.9 per cent. The EBIT margin again reached an excellent level of 5.0 per cent (prior year: 5.2 per cent).

Training: Basis of Successful HR Work.
As of 31 December 2016, Bechtle had 7,667 employees. This represents a year-on-year increase of 462 people. The increase in the number of employees is largely the result of new recruitment, and the percentages were almost evenly distributed over both segments. Training remains a major area of Bechtle’s HR work. As of the end of the year, the group had a total of 500 young trainees. Due to the substantial increase in the number of employees, the training ratio in Germany went down slightly, but still amounts to a sound 7.3 per cent. Compared to the industry average, the ratio of 9.5 per cent at the headquarters in Neckarsulm is remarkable.

Investments for Future Growth.
The Executive Board is confident that 2017 will be a good year. The revenue and earnings are again expected to increase significantly. “This year, Bechtle will again invest in the future. From mid-2017, we will supplement our portfolio with Bechtle Clouds, an offer that consolidates, professionalises and expands our cloud services. We are also working diligently on the development of a comprehensive digital Bechtle marketplace. The goal is to make Bechtle a leading digital IT solution provider in Europe”, says Dr. Thomas Olemotz. 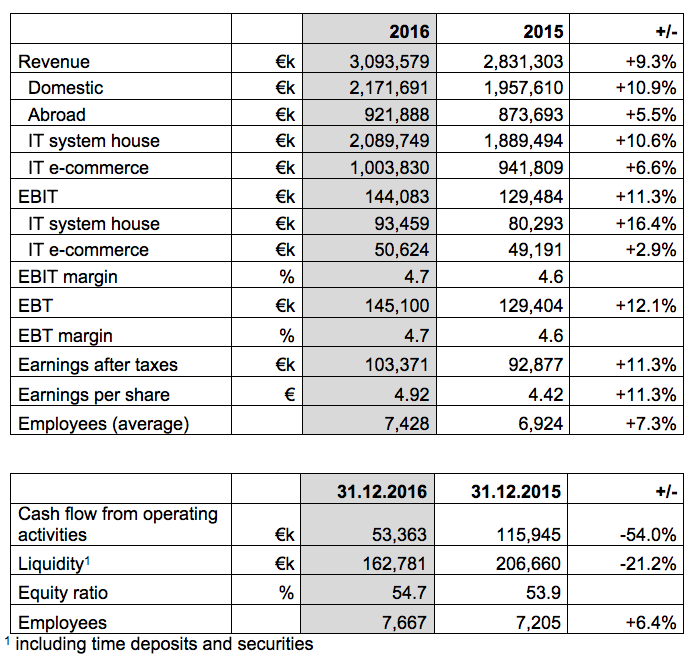 Microsoft: What changes for customers in March
The secret of the EBT margin.

I have been working in product management for the manufacturer Dell Technologies since May 2018. Prior to that, I studied economics at the Heilbronn University and graduated in 2017. I am the contact person for all inquiries regarding the Dell portfolio. However, my focus topic has been the Dell conference solution for about one and a half years now.