Neckarsulm, 10 May 2017 – Bechtle AG has made a highly impressive start into the fiscal year 2017. Despite the high reference values from the prior-year quarter, the revenue climbed 13.9 per cent to €803.1 million. The domestic and overseas business accounted for equal portions of the revenue growth, which was evenly distributed over the two segments IT system house & managed services and IT e-commerce. In the first quarter, earnings before taxes (EBT) increased 16.9 per cent to €31.5 million. The EBT margin thus amounted to 3.9 per cent, an excellent figure for the first quarter. As of 31 March, Bechtle had 7,708 employees, a year-on-year increase of 6.0 per cent.

“With its impressive first quarter, Bechtle seamlessly followed up on the excellent performance of the last years. We are especially pleased to see that all business segments have contributed to the strong figures,” explains Dr. Thomas Olemotz, Chairman of the Executive Board of Bechtle AG.

Growth supported by broad solutions portfolio.
The revenue in the IT system house & managed services segment climbed 14.8 per cent to €563.3 million. The system houses in Switzerland and Austria achieved remarkable growth of 23.4 per cent. The revenue of the German system houses increased 13.5 per cent. The demand for future-oriented IT architectures at the customer site or as a service was high in all areas. Application solutions and the cloud business also continued to grow. As a consequence, EBT underwent a disproportionately high growth of 23.2 per cent to €22.8 million. The EBIT margin went up from 3.8 per cent to 4.0 per cent.

E-Commerce Achieves Two-Digit Growth.
The revenue in the IT e-commerce segment grew 11.9 per cent to €239.8 million. The revenue growth amounted to 17.1 per cent in Germany and 10.1 per cent abroad. Almost all international subsidiaries contributed to this growth. In the first quarter of 2017, EBIT increased 6.8 per cent to €9.0 million. The EBIT margin was 3.8 per cent, a figure close to that of the prior year (3.9 per cent).

Further Headcount Increase for Future Growth.
As of 31 March 2017, Bechtle had a total of 7,708 employees, a year-on-year increase of 439 persons or 6.0 per cent. The increase in the number of employees is largely the result of new recruitment. Compared to the prior year, the number of trainees went up almost 10 per cent to 479. Training remains a key focus of Bechtle’s HR work. The headcount increase is expected to continue in 2017. Currently, Bechtle has about 500 job vacancies.

Further Investments in 2017.
The Executive Board confirms the forecast made for 2017 as a whole, which predicts further significant revenue and earnings growth. “The strong first quarter confirms our positive outlook on the rest of the year. At the same time, our economic strength enables us to continue to make investments in 2017 to make Bechtle future-proof and to move ahead with our strategic projects,” says Dr. Thomas Olemotz.

Bechtle KPIs for the First Quarter of 2017. 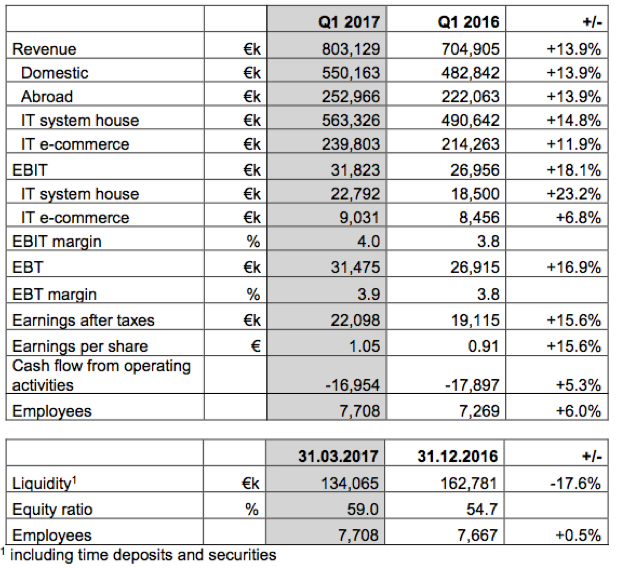