Neckarsulm, 14 May 2013 – In the first quarter of 2013, Bechtle AG generated revenues of €514.0 million, an increase of 5.4 per cent. Apart from the domestic system houses, the European e-commerce companies also made a disproportionately high contribution to the revenue growth. At €14.5 million, earnings before interest and taxes (EBIT) were 16.0 per cent lower than in the prior year. This figure was greatly impacted by the substantial headcount increase in the financial year 2012. As of 31 March 2013, the group had a total of 5,959 employees, 375 more than in the corresponding prior-year quarter.

“Following an outstanding fourth quarter of 2012, we are satisfied with the revenue performance in the seasonally rather restrained first quarter. We have reached our goal to grow faster than the market. However, we are not satisfied with the earnings positions, though I am confident that it will improve in the remaining part of the year”, explains Dr. Thomas Olemotz, Chairman of the Executive Board of Bechtle AG.

As of 31 March, cash and cash equivalents including time deposits and securities amounted to a comfortable €151.4 million. Thus, the total liquidity exceeded the total financial liabilities by €82.9 million. As of the balance sheet date, the equity increased to €469.2 million. The equity ratio improved from 54.4 per cent to an outstanding 58.4 per cent.

As previously, Bechtle expects the revenues in 2013 to outperform the market. As far as the earnings before taxes are concerned, Bechtle holds fast to its communicated goal of reaching or exceeding the prior-year value. “The performance of the first quarter motivates all of us to use the remaining months to reach our ambitious targets for the year”, says Dr. Thomas Olemotz.

Bechtle KPIs for the First Quarter of 2013. 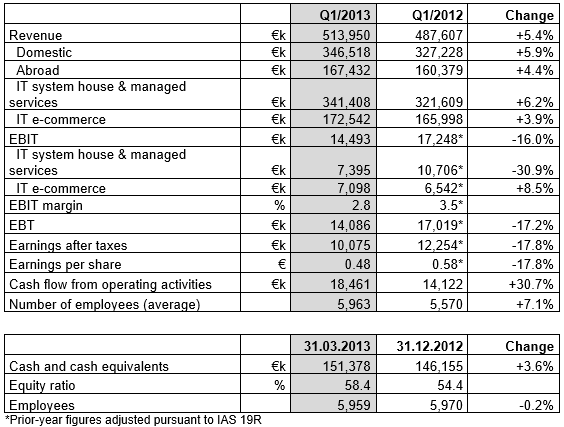