Bechtle AG impressively perpetuated its success in the third quarter of 2017, further expanding the high dynamics of the first six months. From July to September, the company’s revenue increased 19.7 per cent to €873.9 million. Operating income (EBIT) went up 20.9 per cent to €42.5 million. Earnings before taxes (EBT) climbed 16.4 per cent to €42.2 million. The EBT margin remained at a high level of 4.8 per cent. As of 30 September 2017, Bechtle had a total of 8,199 employees, 554 persons or 7.2 per cent more than in the prior year.

“Bechtle’s Q3 performance is impressive. Our future-oriented IT solution and service portfolio enjoys a high level of customer awareness. In conjunction with the excellent economic situation, this has provided us with a noticeable growth surge," explains Dr. Thomas Olemotz, Chairman of the Executive Board of Bechtle AG.

The IT system house & managed services segment boosted its revenue by 20.0 per cent to €616.7 million. The growth was widely supported by stable customer demand for conventional system house services as well as managed and cloud services. Bechtle generated growth impulses especially with the architecture of modern IT workplace concepts on the basis of collaboration technologies. In the third quarter of 2017, segment EBIT went up by an above-average 22.2 per cent to €29.4 million. The EBIT margin amounted to 4.8 per cent (prior year: 4.7 per cent).

E-Commerce Grows 25 Per Cent in Germany.

Investments Progressing According to Plan.

The investments to secure the future competitiveness were pursued vigorously in the third quarter of 2017. After nine months, the investment volume had reached €50 million, which is already more than in fiscal year 2016 (€39.6 million). The funds were mainly invested in strategic projects such as the implementation of a modern digital presentation of Bechtle, the establishment of the Bechtle Clouds platform and the extensive modernisation of the data centre. The construction of a new car park at the headquarters in Neckarsulm was also completed in the third quarter. Investments in the year as a whole are expected to total around €60 million.

In the first nine months, Bechtle achieved two-digit revenue and earnings growth rates, surpassing its original expectations. The Executive Board believes that these growth dynamics will slacken in the fourth quarter – especially in view of the high reference value achieved in the prior year. Nevertheless, Bechtle has stepped up its forecast for 2017 as a whole and now plans to deliver very significant revenue and earnings growth. As originally predicted, the EBT margin is expected to at least remain at the prioryear level. However, this will only be possible if the economic framework conditions remain stable in the fourth quarter and the vendors are able to supply the high quantities needed towards the end of the year. “Bechtle is one of the few one-stop providers on the market that is able to support its customers in all IT-related areas and has positioned itself as the preferred partner of enterprises and the public sector. In view of this strong competitive position, we are confident that we will experience another successful fiscal year,” says Dr. Thomas Olemotz. 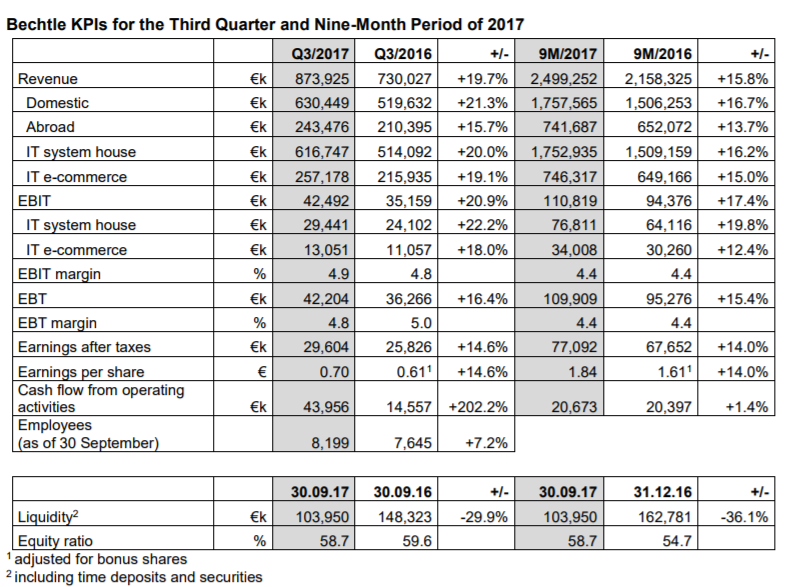 Microsoft: What changes for customers in March
The secret of the EBT margin.

Dataport has awarded Bechtle Hamburg the framework agreement “Supply of hardware and services for IT seats” effective from 1 January 2023. Dataport will procure standardised hardware and related services for its own organisation and customers over the following four years until the end of 2026. The scope essentially comprises PCs, notebooks, thin clients and monitors for around 100,000 seats, with a total volume of approx. €220 million.