“No one can whistle a symphony. It takes a whole orchestra to play it” goes the quote from Halford E. Luccock. Microsoft’s latest Surface hardware orchestra was presented a few days ago by CEO Satya Nadella and Chief Product Officer Panos Panay. What Microsoft presented there sounds like the Berlin Philharmonic and opens the door to a modern and productive way of working. This blog entry will give you an overview of the new devices. On Wednesday there will be a follow up entry exploring the new opportunities in context.

At the beginning of the event, Microsoft presented the third generation Surface Laptop. In addition to the 13 inch version, a 15 inch version has now been introduced into the product portfolio, as well as a version with a pure aluminium housing. This is now available alongside the Alcantara-covered models. This new offering is mainly aimed at business customers that previously who were reluctant to buy a Surface laptop for fear of dirtying it and that it was less durable.

Additionally, Microsoft have built their first Surface device featuring AMD processors, the AMD Ryzen 7 3780U Microsoft Surface Edition with Radeon RX Vega 11 graphics. The AMD CPU, however, only comes in a 15 inch version. Many customers from the business segment wanted to change hard drives due to compliance regulations. Microsoft has also delivered here. The SSD on all laptop models can now be exchanged. Apart from that, the device looks pretty much the same. The Mini DisplayPort has been replaced by a cutting-edge USB-C port. Surface Laptop 3 will be released on 22 October on the German market. Prices start from 1,149 euros (13.5 inch) and 1,349 euros (15 inch).

Compared to what was to come, the unveiling of Surface Pro 7 was pretty unspectacular. Optically, nothing has really changed. Only that the Mini DisplayPort has been replaced by a more up-to-date USB-C port. Tenth generation Intel Core CPUs are now working inside the device, promising considerably more performance. Surface Pro 7 has a 12.3 inch display with a 2,736 x 1,824 resolution. As for colour options, matte black and platinum are available. Surface Pro 7 will be released on 22 October on the German market, prices start at 899 euros.

The first real new announcement: In contrast to all other Surface devices that feature Intel and now AMD processors, this Surface boasts an ARM processor. Rumour had it that Microsoft was going to use a Snapdragon 8cx. But those were just rumours. In collaboration with the chip manufacturer Qualcomm, Microsoft developed their own ARM-CPU, the Microsoft SQ1. Surface Pro X comes in colour way matte black and features a 13 inch display. Similarly to regular Surface Pros, there is a clip-on keyboard specially developed for the device. A very exciting detail is the Surface Pro X’s stylus: The Slim Pen slots into an opening in the Type Cover. When you close it, the Pen is securely stowed inside and cannot get lost. It’s also charged while it’s in there. All versions have a 13 inch multi-touch screen with a resolution of 2880 x 1920. Surface Pro X will be available in Germany starting from 1,149 euros, from 19 November. The keyboard and Slim Pen will be priced at 144.99 euros.

If the Surface Pro X made some jaws drop, they hit the floor when the Surface Neo was announced. Microsoft introduced the first device that would not be available shortly in shops, but in summer 2020—the Surface Neo. A dual-screen Surface with 360° hinges. Microsoft’s vision for productive working in the future. The CPU is from Intel, something that needs to be mentioned right away for a new Microsoft device. It features two identical displays of 9 inches each that can be used together or apart. There is also a clip-on keyboard that goes onto the second display and either a touchpad or a space to show context-sensitive content is left free. You can use the two displays to either view two apps or run one app over both of them. The screens can also work intelligently together. If you click on a link in an e-mail on the first screen, for example, the browser automatically opens on the other. But if you were thinking that Surface Neo works with a native Windows 10, you’d be wrong. Surface Neo will run Windows 10 X—a new version of Windows 10 specially developed for dual-display devices.

As the announcement of the symphony slowly drew to a close, Panos Panay began furiously conducting the finale. And brought everyone to a standing ovation. Microsoft introduced a new smartphone—Surface Duo. It looks like the little brother of the Surface Neo. After the end of Windows Phone, for a long time it was uncertain whether Microsoft would even try to break into this market segment again. But they’ve done it—not with a Windows operating system, but with Android. Licensed by Google. The new device will hit shops in summer 2020. Not much is known yet as to the specs. Only this: Surface Duo will have two 5.6 inch displays, each 4.8 millimetres deep. The Surface Duo features a Qualcomm Snapdragon 855 processor, the highest current specification Microsoft provides. The company was, however, quite reticent on this product in general, and it's possible that something could change by 2020. The connection options on The Surface Duo will include a USB-C port, alongside a fingerprint scanner for quick Android login. 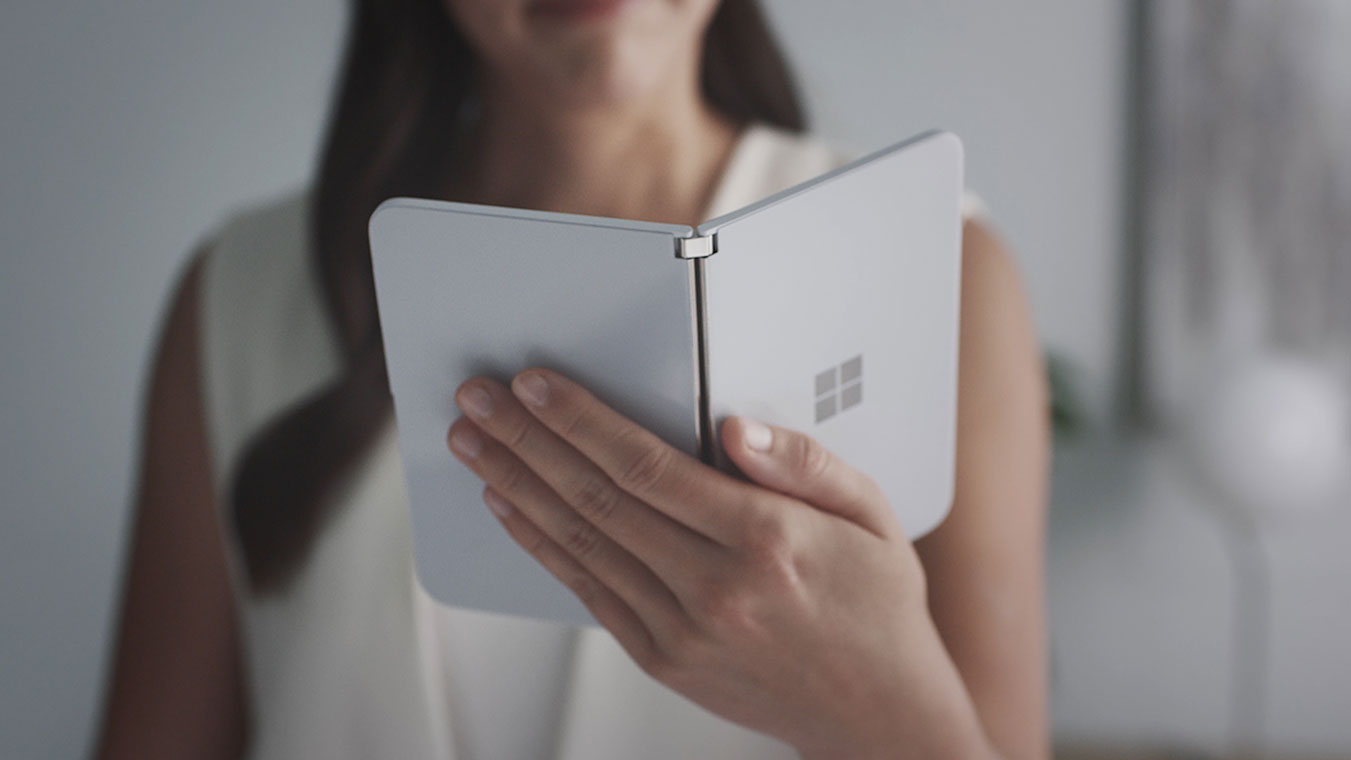 The Surface Earbuds were introduced mid-way through proceedings, and seemed quite unspectacular in comparison to everything else. However, the lack of media enthusiasm in Germany so far is probably due to the fact that it is not yet really certain whether these multifunctional ear buttons will actually be available in Germany. The Earbuds are designed to boost productivity and have many clever features and integrate into Office 365. Typing or swiping lets you navigate presentations or play or pause embedded videos, and the integrated microphone lets you dictate texts. Integration into Outlook is also planned, to read e-mails aloud or cancel meetings. But they will certainly just play symphonies, if that’s all you want them for. Surface Earbuds will be available in the USA in November are currently set to cost around 249 dollars. There is no date or price set for Germany.

Settings Allow cookies
05 May
Microsoft Surface Duo: The smartphone with a certain je ne sais quo.
Microsoft is back in the smartphone game, but their device doesn't come with a slimmed down version of Microsoft 10 as you might expect. Instead, in a first for the company, Microsoft has installed Android OS. I have been putting the device through its paces for four weeks and would like to share my thoughts on what differentiates the Surface Duo from other smartphones and to what extent it boosts productivity.
Read
08 Apr
Bechtle Azure Operations: When it comes to the cloud, we’ve got your back.
It’s easy as pie to procure cloud services these days, but for many companies, it’s still a big challenge to organise a structured migration and to operate the cloud environment correctly. SMEs in particular often don’t have the necessary resources, expertise or time to get themselves up to speed, and that can have a severe impact. Incorrectly operated cloud infrastructures quickly eat up budgets or, in the worst case, become compliance and security risks, and all the benefits the cloud brings, such as fast innovations and being able to quickly react to changing market demands, can either only be taken advantage of to a limited extent or not at all.
Read
More posts
The Surface Pen | The perfect partner for your Surface

Discover the potential of the Surface Pen: Write like on paper and sketch with artistic precision and finer control.

Enjoy great savings when you purchase the Surface Book 2 before 27/03/2020 ✔ Now available from Bechtle!

Microsoft Surface innovations | Anything but ordinary

The Surface Go 2 ➥ ultralight and mobile, suitable for your business. Get the smallest and most affordable Surface device ever!

The Surface Book 3 brings together the best Microsoft has to offer: Security, manageability and flexibility. Discover its versatile uses.

Do more with your time with the new Samsung Galaxy Tab S7.

With the largest screen yet, high performance and useful accessories, the Galaxy Tab S7 is a real all-rounder. Discover now at Bechtle!

Learn more about the latest additions to the Surface family. Surface Pro 7, Surface Laptop and Surface Pro X ▷ Anything but ordinary ✔ Shop now at Bechtle

Tablet and notebook in one ➥ the innovative Surface Pro 7 can be converted in seconds and fits in any pocket. ✓ Discover now!

Master every challenge at work and at play with the new Galaxy Note20. You always have your documents with you thanks to Microsoft Integration.

The new Samsung Galaxy Tab S6. Slim and lightweight – Stay productive wherever you are! Find out more at Bechtle now!

Ruggidised tablet with replaceable battery for extended use. Secure your Samsung Galaxy Tab Active2 and take advantage of its many features in your working life.