Bechtle AG: Substantial upsurge in revenues and earnings in Q3.

Neckarsulm, 10 November 2011 – In the third quarter, the business performance of Bechtle AG continued to benefit from the good investment climate in the IT industry. The persistently high demand furnished the basis for the continuation of the growth recorded in the prior quarters. Year on year, the revenues in the period from July to September 2011 increased by 16.5 per cent to 497.3 million euros (prior year: 426.9 million euros). In the third quarter, the group generated EBT of 21.8 million euros, 36.1 per cent more than in the prior year (16.1 million euros). The EBT margin improved significantly from 3.8 per cent to 4.4 percent. Earnings per share increased by 31.2 per cent to 0.76 euros, compared to 0.58 euros in the prior year.

"In the third quarter, we managed to keep up the strong performance of the first half of the year. We are looking forward to new revenue and earnings records in 2011," says Dr. Thomas Olemotz, Chairman of the Executive Board of Bechtle AG.

System houses significantly above prior year.

In the third quarter, the IT system house & managed services segment generated revenues of 334.0 million euros (prior year: 287.4 million euros), a growth of 16.2 per cent. In this segment, Bechtle benefits from its customers' ongoing willingness to invest and a strong competitive position on the IT market. Moreover, the acquisitions of the first half of the year had a positive effect. Organically, the revenue amounted to 319.1 million euros, 11.0 per cent more than in the prior year (287.4 million euros). In the third quarter of 2011, the segment EBIT increased by 38.9 per cent to 13.6 million euros (prior year: 9.8 million euros). The EBIT margin was 4.1 per cent, compared to 3.4 per cent in the prior year. All regions had a share in this development. Apart from the revenue increase, the improvement in earnings was mainly caused by the much higher gross earnings in this segment.

In the reporting period, the IT e-commerce segment boosted its revenues by 17.1 per cent from 139.5 million euros to 163.4 million euros. Though the growth was high in all countries, it was slightly higher in Germany, reaching 18.8 per cent, compared to 16.4 per cent in the foreign trading companies. In the quarter, the segment generated EBIT of 8.5 million euros, 47.6 per cent more than in the prior year (5.7 million euros). The margin reached an impressive 5.2 per cent, compared to 4.1 per cent in the prior-year quarter. This development was made possible by the higher gross margin due to an optimised product mix.

Though the cash and cash equivalents including time deposits and securities dropped by 23.9 million euros due to factors such as the payments for the acquisitions of the previously leased company buildings, the construction activities in Neckarsulm, Germany, and the acquisitions, they remained at a comfortable level of 105.9 million euros (31 December 2010: 129.8 million euros). The equity increased from 371.5 million euros to a record value of 399.5 million euros as of 30 September 2011. As a result of the balance sheet extension, the equity ratio amounted to 56.1 per cent, only slightly under the value of 56.8 per cent as of 31 December 2010. The extrapolated return on equity increased from 11.6 per cent in the prior year to 16.3 per cent. In the nine-month period, the cash flow from operating activities amounted to 22.2 million euros, compared to 4.7 million euros in the prior year.

Another record year in sight.

Despite the generally expected economic slowdown, the Executive Board expects the Bechtle Group's positive business performance to carry on in the fourth quarter. However, as the business figures of the prior year were already very strong, the growth rates of the final quarter are likely to slacken. Nevertheless, the management confirmed its goals for 2011, which it had announced at mid-year. "We look towards the traditionally important year-end business with optimism and are confident that we will be able to increase the group revenues to approximately 2 billion euros. Moreover, the earnings and margin will also exceed the prior year considerably," explains Dr. Thomas Olemotz. 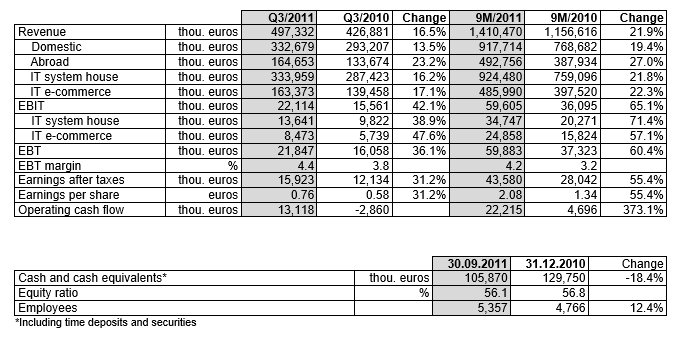