Neckarsulm, 14 March 2013 – In the fiscal year 2012, Bechtle AG’s revenues surpassed the two-billion-euro mark for the first time. Revenues increased 5.1 per cent from €1,994.9 million in the prior year to €2,096.8 million in the reporting period. The significantly higher personnel expenses as a result of the substantial surge in headcount caused EBIT to decline by 6.8 per cent to €80.5 million. Accordingly, the EBIT margin decreased from 4.3 per cent to 3.8 per cent. The earnings per share thus amounted to €2.69, compared to €2.99 in the prior year. Due to the positive business performance and the comfortable liquidity, the Supervisory Board and the Executive Board of Bechtle AG propose to the Annual General Meeting that the normal dividend be raised to €1.00 for the fiscal year 2012 (prior year: normal dividend €0.85 plus special dividend €0.15).

“From the group perspective, 2012 was a good fiscal year. Though the business in some Southern European countries lagged behind our expectations, we were able to grow above average especially in the United Kingdom, in the Netherlands and of course in Germany, thereby further expanding our market share,” explains Dr. Thomas Olemotz, Chairman of the Executive Board of Bechtle AG.

In the IT system house & managed services segment, the group generated revenues of €1,394.5 million in 2012 (prior year: €1,315.7 million). This represents an increase of 6.0 per cent. This development was mainly driven by the home market Germany, where customer demand and willingness to invest remained stable and resulted in a revenue increase of 9.8 per cent. Moreover, the good competitive position and the extensive qualification measures yielded a positive effect. In contrast, the system house business abroad dropped 14.8 per cent to €174.5 million. Here, the restrained economic development caused noticeable reluctance to buy and further postponement of projects. Organically, the revenue in this segment amounted to €1,368.1 million, 4.0 per cent more than in the prior year. In the system house segment, the EBIT dropped 11.0 per cent to €44.4 million (prior year: €49.9 million), especially because of the higher personnel expenses. Due to acquisitions, depreciation and amortisation also went up. The EBIT margin amounted to 3.2 per cent, compared to 3.8 per cent in the prior year.

In 2012, the revenue in the IT e-commerce segment increased 3.4 per cent to €702.4 million (prior year: €679.2 million), a result obtained exclusively from organic growth. In this segment, too, Bechtle benefited from the stable domestic demand and was able to push up the revenue 4.7 per cent. Abroad, demand was curbed especially by the negative economic impact of the European debt crisis. Nevertheless, Bechtle’s IT e-commerce segment outside Germany recorded a growth of 2.9 per cent. In the reporting period, the EBIT amounted to €36.1 million, only 1.1 per cent below the prior-year figure of €36.5 million. The EBIT margin reached a very good level of 5.1 per cent, compared to 5.4 per cent in the prior year.

Significant Headcount Increase as Investment for the Future.

In view of the company’s positive business performance and excellent liquidity, the Executive Board and the Supervisory Board propose to the Annual General Meeting to pay out a dividend of €1.00 per share for the fiscal year 2012. This corresponds to an increase of the normal dividend by €0.15 compared to the prior year (normal dividend €0.85 and special dividend €0.15). The dividend payout ratio is thus increasing from 33.5 per cent to 37.1 per cent. In relation to the annual closing price, the dividend yield is 3.3 per cent (prior year: 3.8 per cent).

In view of the sound economic situation and the group’s good competitive position, the Executive Board currently expects the business performance of Bechtle AG in this year to be positive and above industry average. To fill regional and technological gaps, acquisitions will remain an element of the growth strategy in the IT system house & managed services segment. In IT e-commerce, the Executive Board mainly relies on organic growth and plans to establish an ARP company in Belgium and a Comsoft direct company in the United Kingdom.

“We enter the new fiscal year 2013 with confidence and the goal not only to outperform the market in terms of revenue, but also to return to growth as far as the earnings are concerned,” explains Dr. Thomas Olemotz. 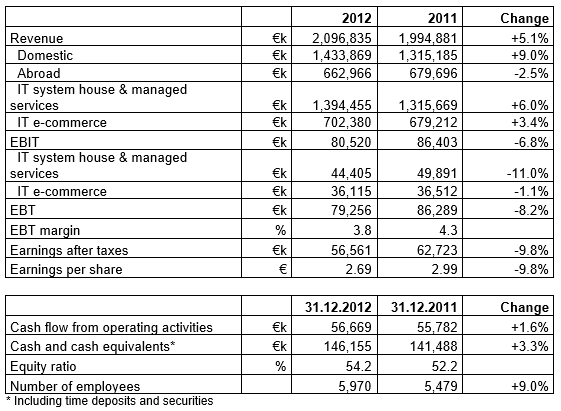 Christian Grusemann
The secret of the EBT margin.