“We are looking back at an outstanding fiscal year. Over the entire period, we experienced a remarkably dynamic development with two-digit growth rates, even in the final quarter. We have again gained market shares. The broad-based increase achieved in both segments is very encouraging. We are proud of this outstanding achievement, to which the entire Bechtle team contributed,” explains Dr. Thomas Olemotz, Chairman of the Executive Board of Bechtle AG.

In the IT system house & managed services segment, the group generated revenue amounting to €1,727.1 million, 12.5 per cent more than in 2013 (€1,535.3 million). The segment recorded growth in all fields of activity – from managed services to the conventional project business. At 13.2 per cent, the growth was particularly strong in Germany. In the previous years, Bechtle had systematically invested in employees and in the portfolio, enabling optimum exploitation of the high and broadly based customer demand in the reporting period. In 2014, EBIT in the system house business climbed 22.6 per cent to €68.9 million (prior year: €56.2 million). This was also due to the fact that the increase in personnel expenses was only below average. Accordingly, the EBIT margin increased and reached the mark of 4.0 per cent for the first time (prior year: 3.7 per cent).

IT E-Commerce Invests in the Future.

Sound Balance Sheet as the Basis for Further Growth.

The balance sheet KPIs of Bechtle AG indicate a sound, strong asset and financial structure. On this basis, it will be possible to quickly and flexibly finance further growth, both organically and through acquisitions. Cash and cash equivalents including time deposits and securities totalled €156.0 million, almost the same as in the prior year. The equity ratio amounted to a comfortable 54.5 per cent. The net debt of Bechtle AG is minus €95.8 million, i.e. Bechtle is free of debt. The return on equity reached an excellent value of 15.6 per cent. The cash flow from operating activities and the free cash flow are also clearly positive and underline the fact that Bechtle has managed to generate the funds needed for growth under its own steam.

As of 31 December 2014, Bechtle had 6,572 employees. Compared to the prior year with 6,219 employees, the total workforce grew by 353, an increase of 5.7 per cent. The headcount increase is the result of two smaller acquisitions and, most importantly, new recruitment. At 11.2 per cent, the IT e-commerce segment grew faster than system house & managed services, which went up 4.3 per cent. Bechtle continues to invest consistently in training. As of the end of the year, the group had a total of 455 young trainees. The training ratio in Germany amounted to a good 8.2 per cent.

In view of the optimistic forecasts for the economic situation in Germany and the EU, the Executive Board expects the performance as a whole to be good in 2015. However, the impulses from the IT market will be weaker than in the reporting period. Especially the situation on the hardware market is challenging. Nevertheless, the company expects the business performance to remain positive and significantly above the industry average. “In the last two years, Bechtle grew at an impressive rate. However, we expect the growth dynamics in 2015 to be weaker than in the reporting period. Nevertheless, we intend to continue to increase our revenue and earnings and gain market shares in the current year,” says Dr. Thomas Olemotz. 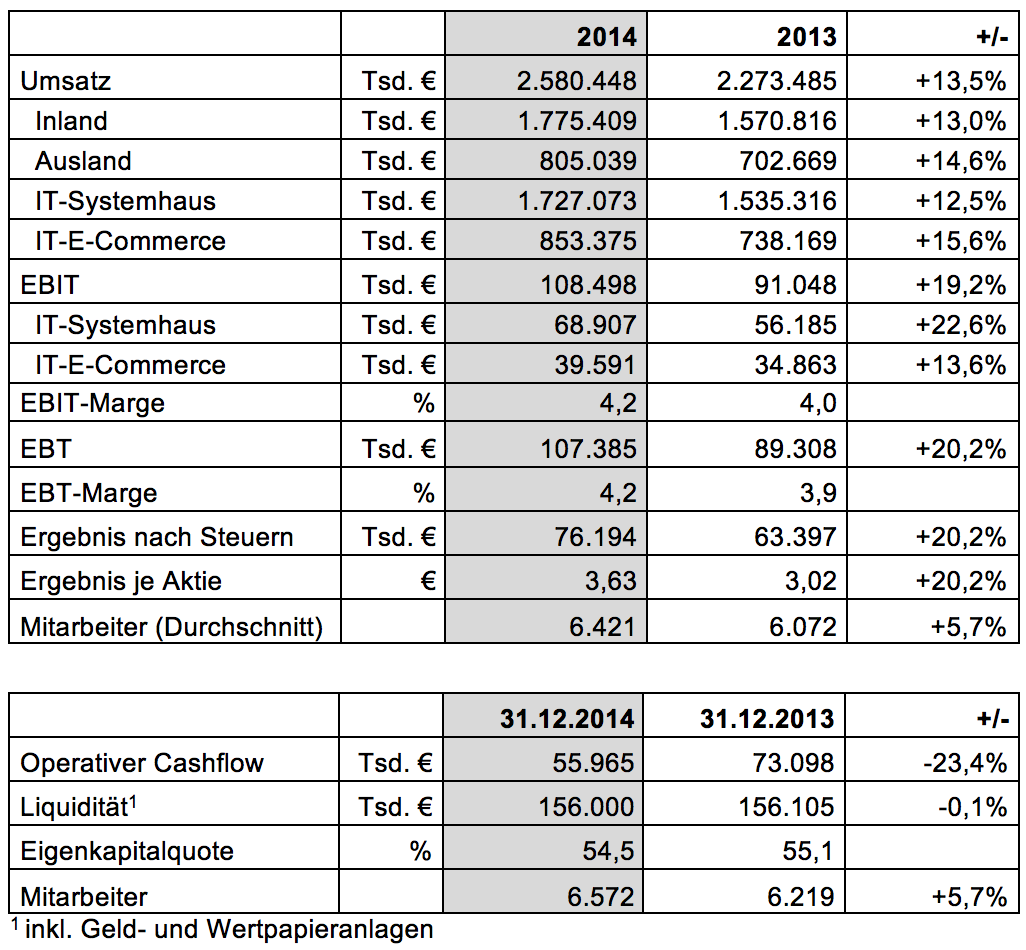